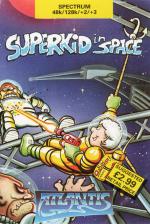 Earth has been surrounded by alien forces who've moved their ships towards the planet in search of vital minerals and resources, threatening to blow it up if anyone interferes. Fortunately, though, mankind is saved because a small boy has offered to save the world What luck There are four 'planetships' where these aliens are hanging out - and your job as Superkid is to find the nuclear detonator on each one, return to your own spaceship then blow up each planet in turn. The first bit is landing your ship - like that bit on the crappy Astro Wars game (but I won't bother explaining in graphic detail what you have to do - cos I can't actually, ahem, do it myself).

As for the main part of the game, well it's nothing more than a flip-screen 'scamper left and right' affair (colourful and cute) - firing/grenading baddies as you go, and using ropes to get up to higher platforms. The levels aren't too dissimilar from each other, and it's utterly unoriginal. But apart from that it's quite good - quite challenging, quite addictive, quite playable and quite recommended Blimey.

Quite good - quite challenging, quite addictive, quite playable and quite recommended.