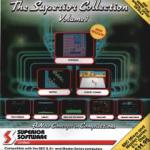 It's become fashionable for the games people to produce compilation tapes and disks of their games - and it must have set a lot of teeth gnashing. For what you could have paid for just one game in the past, you can now have a whole library of games. Frequently first rate ones.

Superior fans have been eagerly awaiting a collection of Superior hits, and here it is - the Superior Collection, volumes 1 and 2. On each disk you get seven old favourites and one new release. On volume 1, there's Repton, Karate Combat, Star Striker, Airlift, BMX On The Moon, Wallaby and Smash And Grab, plus new boy Syncron.

Repton, Karate Combat and Star Striker are among the cream of Superior's games, all excellent quality. Airlift and BMX On The Moon are more average, but still well presented, while Wallaby and Smash And Grab are basic climbing round the screen games and nothing to get excited about.

Syncron is a good quality game in which you fly around collecting power orbs, destroying as many flying and ground targets as you can.

The seven old faithfuls are well up to Superior standards. Kix is not unlike Crazy Painter, where you have to try and fill in as much of a huge square as you can - but there is a 'thing' hanging around which blows you up if it touches you or the trail behind you. Good nerve-wracking stuff.

At £11.95 each, you're not likely to better value for money in the BBC games world.

For what you could have paid for just one game in the past, you can now have a whole library of games. And they're all first rate ones.