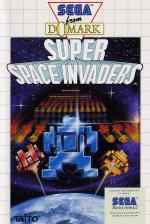 Determined not to be outdone by the hordes of new upstarts, those Space Invaders are back for a second go at conquering planet Earth. What's more, they've taken a few tips from their present-day counterparts and have not only learnt to vary their attack patterns, but they've also brought along some huge end-of level guardians to stop any would-be defenders like you dead in their tracks.

Super Space Invaders is, as you may have guessed, a beefed-up version of the classic 1978 Taito coin-op, Space Invaders. This time it features scrolling playfields, extra weapons, boss aliens, secret levels and all manner of other new, improved formula-related shenanigans. The object of the game for anyone who's been asleep for the past thirteen years is simply to stop the aliens landing at the bottom of the screen. If you can manage this for thirty-six screens, the invaders are repelled forever and you are the hero of the galaxy. If not, this could be the end of civilisation as we know it.

Being today's sort of shoot 'em up, Super Space Invaders has plenty of extra weapons with which to knock the enemy senseless. These weapons are contained inside the bonus motherships which traverse the top of the screen. The spectacular array of greebo-crunching tackle available includes Fire Flowers, a sort of smart bomb which destroys most of the meanies on that level, Hyper Lasers, which destroy an entire horizontal row of alien scum and Buster Lasers, which smash up the screen, obliterating any traces of alien scum in its path.

Motherships in Super Space Invaders aren't restricted to the spaz efforts that flew across the top of the screen without firing in the original game. Oh no, these motherships are also bona fide boss guardians, intent on your annihilation! Amongst these terrifying examples of hardware are a Split Saucer which, as its name suggests, splits into two sections for greater shooting effectiveness, Star Ships, which, as well as launching missiles, whirl a spinning star-shaped plasma bolt at you, and a huge flying saucer loaded up with laser-bearing tentacles of doom!

At the end of every third level, a bonus sub-game appears. It goes by the game of Cattle Mutilation, and it concerns your efforts to prevent the kidnapping of all the Earth's cattle. The bottom of the screen is littered with cows, and as each one is caught in an alien tractor beam, it struggles to escape, alerting you to its plight. The more cows saved, the higher your bonus at the end of the game. Little do the aliens know it takes more than a tractor beam to stop Burger King!

Fans of the original Space Invaders may be dismayed to see the disappearance of every alien crushers' friend - the bunker! Don't be too alarmed, however, as these are more than adequately replaced by the simultaneous two-player mode, which allows a friend to join the action with no increase in the alien hordes! This does have its down side however, as it means endless fights over special weapons, bonuses, cows...

The Master System isn't exactly famous for having a surfeit of shoot 'em ups, so does this one fill the gap? Well, if you like Space Invaders, yes. The graphics are really good, including some especially nice backdrops, the sound is none too horrendous either and there are plenty of options, including the great two-player mode. Still, however you disguise it, it's Space Invaders. The game is good fun for a while, but I'm a little doubtful as to it's lastability, as it all gets a bit repetitive, despite all the new formations and weapons.

Unlike Rad, I really got into this rave from the grave. The graphics are very nice, there are plenty of new features (including some great end-of-level baddies) and the game is fun and varied enough to keep you blasting. The cattle mutilation screen is a real laugh and if you're skillful you can rack up a whole heap of bonus points. The only problem I found is that the game doesn't get tough enough - it's not a complete pushover, but a bit more challenge on the top difficulty setting and on later levels would have helped give it more lasting appeal. Still, Super Space Invaders is a simple, but entertaining blast and with the extra appeal of the simultaneous two-player action is a must-see for Master System shooting fans.

Presentation 83%
Well presented, with quite a few options and impressive opening screens.

Playability 85%
Dead easy to get into and fun to play.

Lastability 79%
It gets tricky later on, but never hard enough to really tax the skills of a true blasting fanatic.

Overall 82%
An excellent shoot 'em up which Is slightly marred by the fact that it doesn't get tough enough on later screens.

An excellent shoot 'em up which Is slightly marred by the fact that it doesn't get tough enough on later screens.