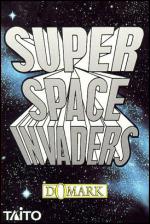 Thump, thump, thump, thump, fizzeuw! The noise still haunts me even today. It's still hard to pass an old Space Invaders machine that's inhabiting the dark corner of a pub or arcade without sticking in a few coins for one last try.

Space Invaders had more than their fair share of copycats too including Gorf, Mega-Phoenix and Galaxians, and it's due to their amazing success, DoMark have decided to add Super Space Invaders as their definitive adaptation of the king of the coin-ops.

The game has 12 levels with each level divided into three waves which incorporate various fighting patterns that have been seen over the years in the other Invaders clones as well as a great deal of original formations.

The aliens move in rows and columns, moving from left to right and back again, dropping down a line when they reach other side of the battlefield. The mothership when hit, drops power-ups ranging from a Buster Laser - destroying any aliens its path to a Fire Flower which wipes out most of the aliens on screen at once. Shields are dropped too and are needed as wave after wave of mutants begin to break free from their patterns and spin downwards, move backwards, expand to twice their size and even split in two when hit. All this and huge guardian ships to combat every three levels as well. Super Space Inva is nostalgia brought up to date.

Unfortunately, the colourful and varied backdrops cause colour clash making it nearly impossible to see what's going on at times and just who's shooting at who can remain a mystery, and sadly, the frequent shields do not compensate for the difficulties imposedon you by this.

However, even with the quibbles that I have, Super Space Invaders is a spot of nostalgia, a cosmic blasting down memory lane that anyone and everyone that played the game in the chippies and videodromes the length of the country would not be disappointed with the end result. I would recommend it to anyone who's after a lasting challenge and a bit of nostalgia who's a real Invader fan.

Some terrible use of colour which renders the sprites almost invisible! A little more care and this could have been the absolute classic it deserves to be. Still it'll keep you occupied and is rather fun.

Some terrible use of colour which renders the sprites almost invisible! A little more care and this could have been the absolute classic it deserves to be. Still, it'll keep you occupied and is rather fun.