Published in Your Sinclair #89 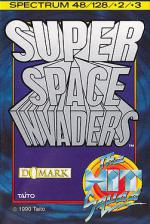 When you come to think about it, assuming an alien invasion would be directed against us is egotism of the highest order. Take the Super Space Invaders, for example. Swooping down in their shiny death-ships, completely ignoring the people (despite the vociferous protestations of several all-party committees) and making off instead with cows. Ha! That's taught us a valuable lesson in humility. Still, doesn't stop us from blasting 'em to bits with a couple of big guns,

It's funny, but contrary to all expectations, this game works. I was convinced that taking the basic idea and chucking loads of extra features on top would swamp the gameplay, but, er, it hasn't. I can't think of one weak link in the design. There's a two-player mode, a feast of power-ups (that drop from the saucers, but - hurrah! - stay on the ground until you collect them rather than disappearing like those in Arkanoid), a bit of silliness (those cow kidnap levels) and some seriously groovy attack patterns. If you look closely you can spot bits of Xevious (scrolling backgrounds), Galaxians (dive-bombing aliens), Gorf (circular attack waves) and loads of other nostalgia-inducing arcade games. (My fave bit is Wave Two, where the aliens all drop like stones only to bounce back up the screen just before you fall off your chair).

So much for the design. The implementation leaves something to be desired. Speed, for one thing; the game plays like rolling a rock down a hill of treacle. Legibility would be another asset. In an effort to distance the game from its oh-so-simple ancestor the coders have put in over-detailed backgrounds. Devoted accuracy to the coin-op has muddied the playability.

In an effort to distance the game from its oh-so-simple ancestor the coders have put in over-detailed backgrounds. And as for speed, the game plays like rolling a rock down a hill of treacle. Devoted accuracy to the coin-op has muddied the playability.