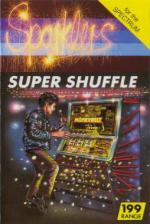 "Visit Los Vegas (sic!) for the night. Resist the temptation to pull the handle of this slot machine if you can!" So runs the blurb that accompanies this fruit machine game. Here in my flat it just doesn't feel much like Lost Wages to me!

Super Shuffle is a good AWP emulation (Amusements With Payouts) and has all the standard fruit machine features you could wish for. There's Hold, including hold after win and Super Shuffle, which shuffles the reels around so that you get a sort of extra go. Nudge lets you try and build up your own winning combination by nudging the reels into position, while Win Sprint lets you stop a high scoring symbol on the left reel and hope that the right reel matches the symbol before the middle reel does. Cashpot is a money box feature thats gradually topped up during play. Finally, Win Stop lets the reels rotate slowly, and you have to stop them on a winning combination.

It's a good little game, with some nice touches, especially the Gamble Your Winnings feature - just like the real McCoy (down, Bones!) And for the price, you really can't go far wrong. The only drawback is that however much time you spend playing with it, it's always better to put your money where your slot is! I mean, I can't even buy a round of beer with the winnings! Beating a machine ain't quite like beating the landlord!

It's a good little game, with some nice touches, especially the Gamble Your Winnings feature... And, for the price, you really can't go far wrong.