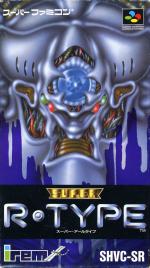 After the stuffing they received in the original R-Type, the Bydo Empire have regrouped and are growing like a festering cosmic tumour of vast proportions. Once again, they're spreading their own reign of terror and destruction through the cosmos, and their fear-inducing antics are going unchecked!

Enter the Alliance, who reformed at the first sign of Bydo-type trouble. They've dusted off one of their old R-9 attack fighters and kitted it out with a whole load of extras from the showroom that make it a far more fearsome ship than the first.

Now all they need is a pilot, and it will come as no surprise that you've been volunteered to take the new ship straight into Bydo territory. Your mission is simple. Destroy the Empire, or the universe will suffer the consequences...

POW Armour ships also carry icons which power-up The Force with a number of different energy weapons. POW armour ships don't hang about. Shoot 'em as soon as they appear and collect the weapon-giving icon left behind for beefed-up destructive potential!

1. Reflective Laser Fires low-power beams that bounce around the terrain taking out enemy targets on the way.

2. Air-To-Air Laser This laser concentrates all its destructive energy into a powerful spiraling beam which fires forward.

3. Spread Laser Fires a maximum of eight laser bolts which spread out in front of the R-9. Very powerful, but slow-firing.

6. Air-To-Ground Missile The first missile icon available. This just fires a missile in a 45 degree angle towards the ground.

7. Heat-Seeking Missile A lot more useful than the air-to-ground model, this fires two rockets which home in on their prey.

Shooting one of the POW Armour carriers releases a power-up that provides the R-9 with The Force. The Force is a detachable shield which fastens itself either to the front or rear of the R-9, protecting it from low-power enemy fire. It also carries its own special lasers that replace the R-9's relatively feeble firepower.

A quick stab of the Famicom's button A (or the R key) propels The Force deep into space, where it destroys enemy fighters on contact.

Without The Force attached to the R-9, the main offensive firepower comes from the front-mounted laser cannon. This cannon is okay for general day-to-day Bydo annihilation, but when it comes to dealing with the bosses, something meatier is required.

Holding down the B button powers up the special weapon. The longer you keep your button depressed, the more powerful your shot. Once the meter reaches peak power, the second, even more powerful, weapon is powered up ready for use!

Two of these can be collected, and help defend the top and bottom of the R-9 from enemy fire. The Bit is also useful for ramming targets.

Darius Twin was okay as far as shoot-'em-ups went, but Super R-type just blows it into deep space! It's a close conversion of the coin-op R-Type 2, except that an extra level has been bolted on - and at no extra cost!

R-Type has always had some kind of magic about it that sets it apart from the swollen masses of horizontally scrolling shoot-'em-ups and I'm glad to say that the Super Famicom version retains that special magic quality that made the original compelling and playable to the extreme!

The graphics and sound are truly excellent. The backdrops and sprites are all graphical masterpieces, and the stereo sound effects and music really enhance the atmosphere.

Super R-Type is an exceptional cartridge that must find its way into your Famicom collection.

This is the Super Famicom shoot-'em-up I've been waiting for, and I'm glad to say that it's excellent! The graphics are marvellous, with highly detailed sprites and gorgeous backdrops, and the music is amazing. Gameplay?

Well, it's fairly easy on the easy level, but normal and hard levels are very tough, and experienced blasting fans will certainly get their money's worth. The only slightly disappointing aspect is that the action occasionally slows down when things get very busy on-screen.

But it doesn't really intrude on the action and it also happens on the original coin-op, so I suppose there's nothing to really moan about. With its new features and addictive playability that sets down a tough challenge, Super R-Type is a must for your Super Famicom.

Presentation 90%
A brilliant animated opening sequence is the icing on the cake. Loads of options and a sound test to check out as well.

Playability 91%
Arcade R-Type has a special quality all of its own, and it's in the conversion in vast quantities!

Lastability 85%
Very easy on 'Kids' level, but the harder skill settings make this a very tough nut to crack.

Overall 90%
The greatest blast ever to grace a home console. Go get it before it sells out!

The greatest blast ever to grace a home console. Go get it before it sells out!