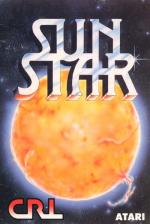 Some years from now, the massive Xxarion Star Corporation placed an energy grid around the sun. This grid produced crystals of pure energy to power interstellar spaceships between the stars. Soon, sixteen energy grids were in operation across the galaxy - providing fuel for interstellar commerce.

However, at the start of the 22nd century, there is a massive build up of unstable disruptive energy pulses. The normal collection craft for the crystals proves to be unsuitable for the job. So a new, heavily armed and armoured supply craft has been designed and constructed to collect the crystals that the galactic economy needs so badly. You, of course, have been drafte to fly this incredible beast. Thus the scene is set.

As I implied earlier, the game is based on grids, with the top half of the screen showing your forward view and the bottom various status information including your short and long range scanners. The energy crystals, grid walls, hyperwarp gates and disruptor pulses, are all represented as coloured squares on the scanner. These same colours are reproduced on your forward view. The effect of this forward view is one of driving across a huge patchwork quilt of coloured squares. This style limits the graphics to a great degree, but what it loses in detail (largely unnecessary in this game) it gains in speed and franticness as you pursue the various objects around the grid.

This is a well thought out game that really has to be played to be believed as it is very fast and challenging. With luck, it will get transferred to the more popular machines, but I can't help thinking that, like most games written specifically for the Atari, it will lose something in translation - but that's life!

This is a well thought out game that really has to be played to be believed as it is very fast and challenging.