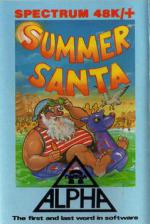 I'm not sure whether this program was too late for last Christmas or too early for next! There seems precious little reason else why the "summer" has been added to the title, apart from it being that time of the year!

This is yet another platform, jump and dodge game, but it has one or two interesting ideas. The plot is that you, being Santa, have to deliver the presents to a sleeping household - either rather late or early - and drink the glasses of sherry which have been thoughtfully left out for you.

There are problems to solve, levers and trapdoors to open and jumps which have to be timed carefully to succeed. The character you control and the sprites are large, reasonably well animated graphics, rather like those used in the "Wally" games. The screens are attractive, colourful and fairly realistic.

Where this program suffers is in the usual manner of attribute colour clashes, and the main character tends to flicker slightly. Some of the positions from which a jump may be made are a little strange and not very obvious. This tends to be somewhat confusing!

Having said that, there is a Demo option which will show you how to complete some 44% of the game. This provides you with many answers and some clues for the screens not yet explored. The house is not particularly large and experts in this type of game might find it a bit too easy to complete.

Not a bad game, just a bit ordinary, however this could be a good game for newcomers or those who cannot cope with the deviousness of the more complicated games of this genre.

The house is not particularly large and experts in this type of game might find it a bit too easy to complete.