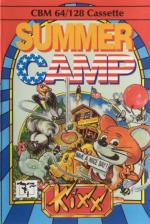 It's not so long since we reviewed Winter Camp in the hallowed pages of Zzap! (Issue 81, in fact). And what do you know, the original game that introduced Maximum Mouse is soon to be re-released on budget (Hurrah - the whole world).

Summer Camp is an American institution (which should be committed to one) where kids are sent to endure the Maplins-type torture holidays popular in good old Blighty. But in one such camp, Wottadump by name, disaster has struck on a massive scale. The camp flag has gone missing 24 hours before the grand opening for another season of 'fun'.

And the horribly vicious camp commander has placed Max in charge of recovery: in fact, it's bring the flag back or *else* (totally bogus, dude). Max realises that he's got a snowball's chance in hell of ever recovering the original item, so he decides to grab a replacement. And what better than a flag that has been very handily plonked on the moon (they'll never notice the difference... he hopes). There's one major flaw in his plan, however; he needs transport to get to the cheesy green satellite.

So he must rampage around, searching for five crates containing pieces of vehicle. These are assembled in a trial-and-error sub-game, before zooming to the next of four levels. Suffice to say, there are plenty of creatures trying to make Max very brown bread, but the camp commander will do the same if he fails.

Summer Camp is a platform fan's dream come true with plenty of leaps and bounds to keep Max fit. Graphically, the game's brill, with plenty of bright and nicely animated creatures making Max's life pure hell. If you missed Summer Camp first time around, go out and buy it now.

Summer Camp is a platform fan's dream come true with plenty of leaps and bounds to keep Max fit.