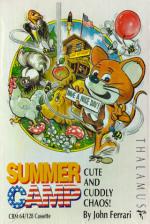 Summer Camp is an American institution, a place where most American kids are sent over the summer holidays. It's a place of outdoor sports, campfire singing and rodent oppression! Yep, yours truly - Maximus Mouse - is always being blamed for the slightest mishap at Wotadump summer camp. So when the camp's flag goes missing, twenty-four hours before its season opening, my whiskers start twitching. The incredibly patriotic, and extremely sadistic, camp commander has promised to barbecue me if the flag isn't found - he things I ate it!

Methinks it's time to find a replacement, unfortunately whenever I go to the corner shop to buy one everyone screams and tries to jump on me. There's only one solution, nabbing the flag on the moon, the one they always show on MTV! So it's time to get some transport, but since my allowance won't stretch to a C5 I'll have to do it myself. On each of four large levels I have to collect Acme crates, each containing a vehicle part. Sounds easy enough, but there's plenty of mouse-hating creatures around to drain my energy or even eat me. It's just as well that I can roll out pool balls from handy dispensers, using them either as a platform or as a weapon to roll over nasties. The levels are also littered with special icons, most of which can be collected - apart from the deadly mousetraps - to give me extra energy, extra lives, a gun to kill nasties, smart bomb, and even the power of flight - on the first level this is achieved by turning my tail so fast it acts a rotor! I can also perform a spectacular low jump to get onto platforms and lifts, although if I fall too far I'll make a big splat - unless I'm wearing a parachute.

As I collect the Acme parts, a vehicle blueprint builds up. When this is complete a subgame begins - I must assemble the vehicle using switches. If I select the correct switch, a vehicle component is fitted; get it wrong and *all* the fitted components are put back into their boxes! I get a bonus if the vehicle is completely assembled within the time limit - though even if I fail, the vehicle is magically assembled to take me to the next fun-filled level.

Summer Camp is no masterpiece, but it is a fun little game. The simple platform action seems very old-fashioned but it's livened up by jolly tunes and some very cute, colourful graphics.

Each of the four levels has its own unique graphical style, ranging from the Wild West to the moon - complete with the mousy hero wearing a goldfish bowl on his head!

Apart from the pool ball dispensers, though, there's very little in the way of gameplay innovation - the bonus sections are disappointing, solved merely by trial and error. Nevertheless, the game's certainly a fun-packed challenge with plenty to write home about.

All in all, I'd say Summer Camp is well worth a visit.

Summer Camp is as cute as Creatures, with just as many amusing touches such as the parachute opening *after* Maximus has crashed to the ground. Then there's the cat who eats Maximum (!), the horse yet to be stable-trained and the trampoline-like surface of the pink moon.

The actual gameplay is a bit overfamiliar to veterans such as myself: it's Jet Set Willy time with lots of pixel-perfect leaping about. Additional features such as spitting melon seeds (!), picking up pool balls and suchlike never completely disguise the lack of originality.

Nevertheless it is very playable, the sub-game provides a nice intermission while the graphics are top-notch - imaginative and very entertaining. For newcomers, or fans of this type of game, Summer Camp will be perfect.

Presentation 80%
You stay on the level after death, help screen and in-game arrow hints.

Graphics 82%
Imaginative, varied and detailed. Lots of colour and humour.

Hookability 78%
Freedom to choose your own route through initially confusing, takes time to work how to go about things.

Overall 80%
A fun way to spend many winter nights!

A fun way to spend many winter nights...! The four levels provide a formidable and varied challenge.