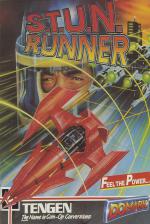 You've done some Hard Drivin', but have you tried 900mph speed racing in the 21st century's Spread Tunnel Underground Network Runner? Taking on all contenders and the tightest of time limits you race through the 24 tunnel networks, the twists and turns getting wilder and crazier with each new level.

The Runner is initially unarmed but progression sees wing pods added and lasers for disposing of annoying drones and mag cycles that can slow you down. Avoid the armoured drones though; they're indestructible.

The Runner can climb up onto the sides of the tunnel walls to keep up speed. Running over boost pads gives extra acceleration and allows the Runner to loop over the top of the tunnel. Ramps lift it momentarily into the air over obstacles. Collecting thirty green stars (blocks on the C64) gives a Shockwave (smart-bomb) for use later on.

Three skill levels allow the Runner to start on selected stages of the network with two continue-plays. Also in the game are Challenge Levels, consisting purely of boost pads where the Runner has to race over as many pads as possible to get into the Booster Bunch Hall of Fame. The prize for the fastest Runners is a chance at the Ultimate Challenge track where everything is thrown at the player.

I adored the coin-op, so I was wary of this one following the disastrous C64 version of Hard Drivin'. I hoped for something at least passable, especially with ex-Ocean programmer Zach Townsend behind the C64 version, and I almost got it with a good main sprite, accurate tunnel persective and some of the coin-op's presentation.

I was pleasantly surprised by its looks. Pity about the actual tunnel effect: it's faster than I expected, but still relatively slow with limited types of turn and a severe lack of side object graphics. After Drivin', S.T.U.N. Runner really wasn't a possibility, but it looks fairly close to the coin-op so well done for that, but otherwise half marks for sacrificing the fun of the game.

The Amiga vesion is just one bad dream, with a less convincing 3D effect than the C64! Sure, it's got all the vehicles and side graphics but it's too slow-paced to keep even me hooked. I feel the need for speed and i'm not getting it here. To top it all, the pale colour scheme suggests a PC or ST port-across and the weak graphic of the Runner looks like bits have fallen off it!

I'm stunned by just how bad this is, especically the pathetic Amiga version. The exhilarating speed of the coin-op has been replaced by amazingly sluggish 3D - it's more like a Sunday drive than a race!

Without the speed, you're left with some very limited gameplay: running over bonuses and turbo pads while avoiding or shooting the odd nasty. There's hills to ride over but it's deadly dull.

The C64 game is actually faster than the Amiga, with a decent speed effect, but ultimately still suffers from the same lack of content. Not a bad effort on the C64 though.

Graphics 41%
Washed out, lacking detail and sluggish in movement.

Lastability 36%
...and with little in the way of graphic variety to reward progress, the appeal is limited.

Graphics 52%
Looks rather like the coin-op with a convincing Runner sprite. hasn't got the speed or smooth tunnel animation to match, though.

A graphically good conversion lacking all important fun and excitement. Not so stunning, more medicore.