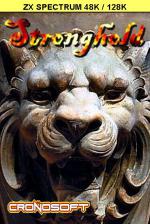 Stronghold is a top down run and puzzle game from Russian development group Red Triangle and is available in both 48k and 128k ZX Spectrum models. It is also a game that has filled me with dread ever since I was 'volunteered' to review it. I have set aside some review time on numerous occasions over the last few weeks, but each time I sit down to begin I get a sinking feeling in my gut and cannot force myself to load it. It feels like a scene from The Ring, with the videotape switched for a .TZX file. I know it's irrational, but there is something about this game that I can't explain, something ominous. It has been a struggle, but I have now built up the courage. I hope you all appreciate lengths we go to at RGCD!

Stronghold has a typical sub-standard RPG back-story about a warlock (with the dubious name of Gorgius) who after a spot of DIY magic manages to awaken an unspeakable beast that possesses him and turns his house into a field of fire, with a black stone pyramid at its centre. Your quest is to free the warlock and reduce the pyramid to rubble, thereby freeing the village from evil. Nothing new there then.

The game sees you moving from screen to screen collecting and using items as you go. A number of elements are trying to halt your progress (such as gargoyles, locked doors and ravenous jaws) but nothing more so than the huge clock that is ticking down. There are many hourglasses that will enable you to temporarily halt time, but if the clock reaches zero then your quest has failed.

Admittedly, the game is well-presented with a nice loader, an instructional demo mode and customisable controls. A colourful backdrop of the burning field and black pyramid is always visible and almost makes up for the extremely dull in-game graphics (the playable screen is small and the graphics displayed in depressing shades of grey). However, at least they are functional. Sound doesn't fare much better as the 48K version is limited to nasty little bleeps for footsteps, with the 128K Spectrum scoring a little higher with a passable theme tune before and after your game, though whilst playing it is just the same as its poorer brother.

But as is often said, aesthetics don't make a game. So how does it play? Unfortunately Stronghold is also a little lacking in that area too. Whilst the premise of a Gauntlet-style game of running around fighting beasties and collecting potions seems good, the reality is more of a slow paced stroll through the dungeon and a memory test of the path to follow. The majority of puzzles are of a trial-and-error nature and limited to ordering your actions (such as killing gargoyles before you try to take the keys) and the unforgiving way that you are locked in a room if you make a wrong move (forcing you to quit and start from the beginning) takes most of the fun from the game.

There are positives though, the death screens are nicely drawn and have a good use of colour and people who enjoy somewhat linear exploring games may get some fun from it. But for me, the game itself sums up my reviewing experience nicely (maybe I should have listened to my gut after all)...

"An unendurable pain tore my mind into millions fragments [sic] and I lacked for energy to move... The death eased me..."

Regretably, Cronosoft were unable to provide us with a playable demo of Stronghold to include on disc. However, the full game will be available direct from Cronosoft in the near future.

SirClive's review may be a little harsh, but I have to admit that I wasn't keen on reviewing this game either. In Stronghold's defence, it isn't actually a bad game and fans of the genre will most likely get a kick out of it. I've played worse, but I've also played many other new releases that are far better - the problem is that there's nothing really outstanding here and as a result the game would have most likely received a similarly average score if it was released back in '89.

Aside from the fact that it's a new release for the old spectrum that *isn't* a simple single-screen arcade game or a collect-em-up platformer, Stronghold is just very average. Perhaps it would have received a more generous score if this was a RPG orientated mag, but as a retro-arcade enthusiast the game certainly didn't maintain a strong-hold on my interest.

Very average... As a retro-arcade enthusiast the game certainly didn't maintain a strong-hold on my interest.