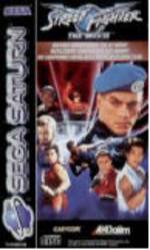 AKA 'a birrova travesty'. Capcom have been making superfluous remakes of Streetfighter II for years, which have received less and less favour from the buying public. Unfortunately is only one reason not to buy this game - the other is that it's crap.

Only one character is added, Captain Sawada, and several more interesting favourites have disappeared. The game uses digitised sprites that resemble the characters from the god-awful film. Although these are fair translations, they don't look half as good as the old cartoon style, the backdrops are, however, a complete mess. Grainy, dark representations of 'scenes' from the movie, that look more limp than a week old lettuce.

Gameplay-wise the whole thing is devastatingly unremarkable and quite slow to boot. Why Acclaim, who have both X-Men and Mortal Kombat 2 on their books shoved this out is beyond us lesser mortals.

Snoozefighter: The game. Avoid this and get a real man's beat-'em-up.

Snoozefighter: The game. Avoid this and get a real man's beat-'em-up.