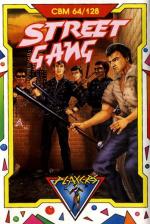 Mickey doesn't like staying in and watching Blue Peter. He hasn't got enough bottle tops to make an inter-galactic racer, so he's turned his attentions to the streets.

The streets are full of ferociously violent bloodthirsty hoods - but that doesn't bother our Mickey - he's a man, not a mouse. Armed only with his fists, he's determined to make his way to the east of town where he can work off any aggression he's still got left (a lot by the looks of it) on the notorious rival gang leader, the 'Curl'.

The Amiga version made me laugh a lot so I was looking forward to a really hilarious time. I wasn't disappointed either - surprised-looking stickmen, graphically crippled buddhas and what looks like an underground family of mutating moles - really funny.

Then I realised this wasn't supposed to be a comedy show but a deadly serious (well, sort of) game. Er... well, what can I say? I didn't want to play for very long - there's little chance of varying your punching movements and not much more motivation to the progress. If I'd paid £1.99 for this, even taking into consideration the interesting soundtrack, I'd be pretty upset. I'd much rather spend it on a half of cider, a cheese sandwich and a doughnut.

It's hard to believe that the same team who brought you Great Giana Sisters could bring you this. If you're looking for a game with oodles of playability and some halfway decent graphics, this definitely *isn't* it - not unless you call turnip-headed hoods and gangmen in green jogging suits state-of-the-art thugs. the control method is especially designed to give you as little manoeuvrability as possible - it's a bit like trying to swim the English channel in a radiation suit or walking with a rubber band tied round your legs. Painful? Yes. Original? No.

Graphics 30% Fairly standard backdrops kindly provide a home for some below-par sprites that no-one else seems to want.

Sound 90% Psychedelic title track can be mixed and scratched by pressing selected keys.

Hookability 22% Not one to grab you by the neck.

Lastability 20% You might play it once, but you won't want to play it again.

Overall 30% Not one to show off to the gang - but you may some pleasure out of the music.

The control method seems designed to give you as little manoeuvrability as possible... You might play it once, but you won't want to play it again.