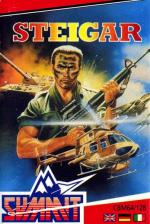 Mercenaries are a bunch of rock 'ard muthas, aren't they readers? They get paid oodles of spondoolies to do dangerous and often suicidal things (like working for Zzap, only we get peanuts!).

The hero of Steiger is no different (i.e. he's several sandwiches short of a picnic basket).

Trained as a chopper pilot, our hero's task is to blast the cack out of anything that moves. And these 'anythings' are the enemy hardware that arrive from land, sea and air - though they aren't offering any olive branches (except perhaps to smack Steigar over the head with). There are several missions, played in succession, and Steigar is raring to go kick some enemy ass (boy). The first task is to destroy an enemy naval unit, and for this the helicopter is initially armed with a poxy cannon, three smart bombs and unlimited bouncing bombs (jab the fire button for the cannon, hold it down to drop a bouncing bomb and space bar for the smarties). With the expiration of certain antagonists, five different coloured icons appear. Blue = speed up, yellow = extra points, grey = extra life, red = extra weapons and orange = extra firepower.

Sad to say, even when you reach the fat barst at the end of the level, it's really not worth the effort. Instead of exploding in a shower of debris, the stoopid sprite quietly shuffles off the side of the screen (very spectacular... not!). But even reaching the first of these is tough: the enemy troops are enthusiastic in their task of Steiger bashing. A hail of missiles greets your advances, and a lot of fancy flying is needed just to stay in the air.

Even when you manage to catch the icons, a missile or bullet up the jacksie is generally your reward. The game is also bugged, many's the time I've dropped a bouncing bomb that has spanged off the canopy of a couple of aircraft without destroying them (that's a really neat trick guys, how do you do it?). Add to that the badly drawn sprites and irritating title tune and sound effects, and you have a game that barely manages to stay airborne.

Even at a budget price Steiger, in my opinion, isn't worth the audio tape it's recorded on.

With badly drawn sprites and an irritating title tune, Steiger isn't worth the audio tape it's recorded on.