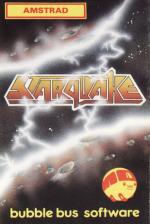 Bubble Bus are quite a small software house in comparison with the Oceans, Activisions and Firebirds of this world but they keep producing good little games. Wizard's Lair and Hi-Rise were both good value for money products and this latest arcade exploration game looks set to do even better for them.

The star is BLOB (Bio-Logically Operated Being) who has to rebuild the core of a planet to save the universe - ho, hum, it's all in a day's work. Translated from the inlay, that means he has to collect the nine pieces of core from amongst the maze of 512 game rooms. Naturally this task is far from easy because of the size of the game and the obstacles that face Blob.

The rooms are fairly simply designed to look like a cave system but the lack of variety in the colour detracts a good deal. Many of the features and aliens are drawn in detail to look good, but again colour is not used to the full. This slightly disappointing look to the game is a result of it being a conversion, but fortunately the gameplay is a different matter.

Blob is just that, a small circular creature with bug eyes who has two main methods of movement - walking and flying. Walking is done unaided but leaves Blob affected by gravity, so that he will drop like a stone when he walks off the edge of a platform. He can be guided left and right in the air but a much easier form of travel is using hoppers. These can be picked up at many points and flown freely around but restrict Blob's ability to pick up some objects and get into some game sections. They sit underneath him like a hover platform and can be dropped off at another hopper point when Blob needs to go on foot again.

Another very handy means of transportation is the teleport terminals that can be used to get to a different area of the game. Each one has a five letter name which you need to know in order to use it but once discovered they don't change in subsequent games, so travel becomes considerably faster. In some places there are anti-grav lifts that can only be used when on foot, but are essential in some sections where a hopper can't be taken.

The aliens that inhabit the cave come in several different breeds but there are only two important distinctions to be made be-tween them. Most of them fly around the screen draining Blob's energy when they touch him, but one particularly nasty type explodes on contact losing him a life. Lives can also go down the Swannee by running out of energy or colliding with several deadly, static objects.

Other unmoving objects can be used to help our little friend and they appear all over the place at random. There are four basic types that replace energy, platform blocks, bullets and lives. There are also the core elements, keys and passes that will be needed to complete the game.

The blocks and bullets also help Blob out, the former being used when on foot to get him over obstacles and the latter to blast away most of the aliens. Blob can run out of all of these, particularly if you re-explore an area of the game from which you've removed all the replacements.

The action is decidedly frantic with the pressure always on from the energy-draining aliens. Along with the need for mapping and finding objects this makes the gameplay demanding so that you'll be absorbed enough not to notice the disappointing use of colour. Not very original but packed with action and challenge for any standard of player.

A big one for exploration freaks, and the gameplay's pretty strong too. There are plenty of interesting features to experiment with, and some tough obstacles to get past. It's nothing very exciting to look at, but a big task and lots of nice touches more than make up for this

Some of the aliens are difficult to see, so you can be taken by surprise, otherwise it doesn't lose a lot as the use of colour is pretty poor anyway.

P. 512 Screens.
P. Nice movement controls for walking, flying and lifts.
P. Hectic gameplay with non-stop action to cope with.
P. Plenty of objects and features to discover and use.
P. Tough task but easy to get into.

N. Not much originality.
N. Unimaginative use of colour.

It's nothing very exciting to look at, but a big task and lots of nice touches more than make up for this.