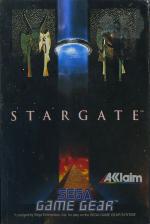 And, lo, the great alien deity Ra looked down upon his slaves and saw strangers among them. He who lives with Goldie Hawn and that bloke out of that crap Jack Nicholson Werewolf film had managed to amass the skinny locals into some sort of army, which were threatening to overthrow the alien leader's power.

Worst of all, though, a fatal flaw in Ra's plan for domination over this distant sandbowl had been exposed - he was in fact that not exactly hard bloke out of The Crying Game. Only one thing remained to do: send the attackers a series of puzzles and hope they'll become confused...

The Game Gear version of Stargate takes a... well, more overall view of the movie's plot than the platform-based Megadrive game. Ra is after control of a series of Stargates and, assuming the role of Daniel, you must defeat a series of his consorts in a tile-based puzzle game. Basically, a selection of illustrated tiles are shown at the top of the play area, and duplicates are dropped into a circular play area. When stacked in piles of three or more similar tiles, the relevant icon disappears. This is then repeated until all the tiles are removed - although you are occasionally asked to do so twice. The winner then secures a Stargate on the game's Othello-like galactic map, with the owner of the most squares saving or destroying the galaxy.

You know how Tetris and Columns have a strange addictive quality which keeps the basic idea fresh? Well, that elusive element is sadly missing from this handheld interpretation of Stargate. Whilst the basic tile-piling idea is solid enough, the game never seems to pic up speed or throw anything troublesome at the player. Ra's men don't really pose much of a problem, and without the addition of particularly tough opponents, the whole thing soon gets dreary.

Still, whilst Game Gear Stargate doesn't follow the plot of the film particularly closely, they do have one thing in common: they're both dull in the extreme.

Contrary to Steve, I found Stargate to be quite a tidy little puzzler. Once you've adjusted to the overhead perspective, and got up to full speed, the puzzles and the Battle Mode option prove to be reasonably entertaining. Nothing to match Columns, but not a bad effort nonetheless.

Graphics 62%
Nice intermission characters, but bland use of colour in the game itself.

Sound 58%
A couple of tunes, and a smattering of dull effects.

Playability 74%
Easy to pick up, but never gets taxing.

Lastability 67%
The opponents could be tougher - and should.

Value For Money 63%
There are much better puzzlers on the rounds.

Overall 66%
A brave idea, but ultimately let down by its dull computer-controlled players.

A tidy little puzzler... Nothing to match Columns, but not a bad effort nonetheless.