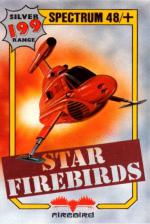 No question about it, Star Firebirds is a shoot 'em up. No frills, just things moving around the screen and you firing at them. It's closely based on Galaxians the ancient arcade hit that ruled the arcades several years ago (its still pretty big in Southend).

However, I was disappointed. The gameplay is authentic but the graphics are very poor.

The Star Firebirds themselves are dozens of multi-coloured birds that swoop around in curves and circles dropping bombs on your laser base. If you are smart you will move it. Survive long enough and you may get a visitation from the enormously large emperor bird which hovers around - blast it enough times and you get bonus points.

The game falls down with its graphics. Everything is small and unimpressive which seriously detracts from the appeal. I find it hard to get seriously interested in blasting when the thing I am to blast is not much larger than a pin prick.

Star Firebirds gets bonus points for being a faithful reproduction of the original acrade game and for having part of Stravinsky's Firebird suite moderately well played at the beginning of the game.

Buy it only if you are an addict of the original game or have an enormous monitor.

A fair copy of the Galaxians arcade hit, but the miniscule graphics may well put you off.

A fair copy of the Galaxians arcade hit, but the minuscule graphics may well put you off.