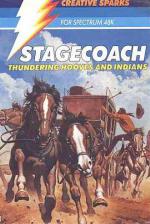 At one time or another, most people must have fancied themselves as heroes of the Wild West. This game gives you the chance to relive those great days as Kidd Rivers.

Kidd's job is to save the occupants of a runaway stagecoach and take them safely to their destination, San Pedro. First he must board the stage by jumping from horseback onto its roof and then, once he has control, he must drive around collecting those unfortunates who fell out of the coach whilst it was driverless.

After finding the lost passengers Kidd takes the stage through the mountain passes. You have a map to help you but it seems to be very badly scaled for your task.

Extra points are accumulated here by picking up boxes of bullion and ammunition which are lying around. This particular stage of the game takes far too long and quickly becomes tedious.

Once out of the mountains you're back on the prairies, which are now swarming with fearsome Comanches. They attempt to board the stage and capture your passengers. If you are lucky, you may succeed in shooting the Indians before they empty your stage. When this happens you simply return to do the whole thing again at a higher level.

Stagecoach's graphics are something of an anomaly because although quality is poor and the drawings themselves quite bad, they are surprisingly amusing. I'd call them the computer equivalent of a cheap laugh. Sound is fairly limited and does nothing to stretch the Spectrum's facilities (however limited they may be!).

In short, a fair game with some good ideas. Nothing outstanding and nothing abysmal and only one major shortcoming. Why is the mountain stage so hard, with difficult control and a nigh useless map...?

One of my favourite scenes in any Western is the part in which the hero jumps from the horse to take the reins of a runaway stage and save the day.

Stagecoach appeals straight away because it features that scene and it is fairly easy to do the trick.

The graphics of the cowboy and horse are black and rather sticklike but move rather well, but *why* is the sound so poor?

Stagecoach is fairly entertaining with some original ideas but with the mass of quality software available for the Spectrum, it will probably sink without trace. It doesn't quite deliver the goods.

Creative Sparks have come up with a nice idea for a game, one with some potential. Unfortunately, this is all entirely wasted on Stagecoach, a program notable for its frustration element rather than its appeal.

Mediocrity is the name of the game, with the lacklustre animation and sound and with no real redeeming features. Stagecoach misses the bus.

Mediocrity is the name of the game, with the lacklustre animation and sound and with no real redeeming features.