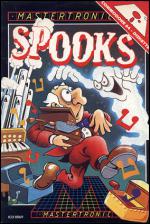 This is the first C64 arcade adventure to come from Mastertronic, and hopefully it won't be their last.

This particular exploration takes place within a large mansion and its surroundings. You are shown a small portion of the plan view of the playing area, which flicks to a new area when you reach the edge of a room. To the side of this is a box, displaying a map of your progress through the mansion.

Within the mansion lie several musical boxes, which you must find and use to escape. Getting these boxes is made difficult by the number of locations you need to explore, and the presence of some ghosts.

At the bottom of the screen, a description of the current room is displayed along with a comment about how things are going - for example when you get killed by a spook, the comment is 'a ghostly death'.

Above these comments is an indication of your energy (you start with 100 units, which decreases depending upon your exertions), the number of boxes found and a decision timer.

Also scattered around the multi-room mansion are various other objects, amongst them food for keeping up your energy. Some of the food is poisoned and you must learn from experience that which can be eaten safely.

The other items range from hot coals, torches and tables to potions, maps and keys. The keys are used to go through otherwise impassable doorways and the maps give you a complete map of the playing area on screen. I haven't yet found a use for some of the other things though.

When you've collected all of the music boxes, you take them to the exit (marked on the map by an 'E') and play them to get free. Should your energy get to zero, through one way or another, then the game is over and your percentage is displayed.

When you wish to perform an action, such as picking up an object, you press the fire button. You are then presented with a menu of options. These include the ability to pick up, drop or manipulate an object (eat, wear or throw it). You are given a limited time in which to make any decisions, so you need to think fairly quickly.

This game is rough on the eyes, particularly when you scroll from room to room. Apart from that it's excellent value from money and gives plenty of playing area and things to suss out. Probably about 18 months ago this would have sold quite well as a normally priced game, indicating the rise in software standards and what good value this is. There are of course much better arcade adventures, but if you've got £2 to spare you could do worse than buy this.

Although not graphically and sonically spectacular, Spooks has all the elements of a good arcade adventure - size and complexity. There are a lot of locations to explore and objects to find and utilise correctly. At only two quid it's a steal.

Another £1.99 special and, although being pretty grotty, provides plenty of challenge. It's much better than most of the older Mastertronic games and at this price gives excellent value for money. I didn't particularly like it, but then I dislike this sort of game anyway.

Hookability 52%
Not likely to terrify you with its ghosts.

Lastability 63%
A big play area and some puzzling.

Crude graphics and horrible room to room scrolling but a good arcade adventure for little cash.