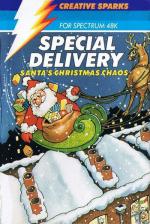 It has long been a tradition in the popular music business to produce Christmas 'hit' songs - something suitable to the season. Special Delivery by Creative Sparks is probably setting a new trend (a dubious one, many may think) by bringing out the first computer Christmas game.

In Special Delivery, you take the starring role as Santa Claus on his merry way delivering presents to all the excited children. Unfortunately, Santa has only five hours to complete the task, and if that wasn't bad enough, he discovers that there aren't enough presents to go round.

The only way to ensure there are enough is to collect them as his helpers drop them from on high, avoiding the clouds as he goes.

The game is basically played in three stages. First, Santa is driving his sleigh through the air over mountainous terrain. He has to avoid the clouds; otherwise, one of the presents in the bag is lost. Above, angels are dropping presents which must be collected. A target figure for collection is set at the base of the screen. Once this is met, you progress to the second screen. Some angels are red in colour - don't collect those parcels! Some clouds are thunderous, and if Santa is hit by lightning he loses an hour of time.

The second screen commences with Santa arriving over some large houses and he must land on the roof and walk to the chimney. Entering the chimney, the screen cuts to an interior view. Three ladders lead downwards, and you control Santa as he descends, moving him left and right to avoid the fireballs that rush upwards. On harder screens, there are also objects falling down.

Getting down safely leads Santa into the house. This is displayed as a 3D cutaway of the floors, with stairs leading up. The idea is to drop a parcel beneath the Christmas tree then get out to move onto move difficult screens. Failure to collect the target figure of parcels from the angels in screen one, means that you cannot land on a house, but must attempt to drop parcels accurately on to the houses.

This is a seasonal game for you, the only one I've seen that relates to Christmas or the fallacy of Santa Claus [No, he's real, isn't he? - Ed]

The novel idea of collecting your presents from the angels of heaven alone, avoiding hazards of lightning and mountains and devils (Does Santa really go to all this trouble every year?) is very appealling.

Whipping down chimneys is more difficult that I first thought and gets even more difficult on the higher stages with loads of flames rushing up to meet you with soot whizzing down after you - difficult, eh?

Now, here comes the exciting part... actually placing the presents at the base of the Christmas tree, while avoiding the happy children rushing to see if Santa has arrived.

Unfortunately, you can't climb up chimneys, so it's off to find the key to open the front door, although sometimes the door is weirdly placed, sometimes on the second or third floor.

Despite the seasonal overtones, this turns out to be quite a difficult game, but I don't think it's going to be very addictive.

With Christmas getting ever nearer, it's time for the seasonal spate of games. And here's one complete with Santa, plus reindeer, presents an' all. This is a game which I doubt anyone will be playing in June, but with that said, it's still a good game.

The graphics are small but smooth and well drawn and a good jingle bells turn is played.

Special Delivery is fun to play and provides quite good value for money considering how many stages there are and that some of them are totally different from the others. The game is addictive without being tremendously time-consuming or taxing. A good game worth considering for Christmas.

I must admit to being rather horrified by the thought of a Christmas-specific game - would it feature Bing Crosby or Perry Como on the soundtrack?!

Actually, Special Delivery turns out to be a tough game to play with lively graphics and quite a lot of content. And no Bing/Como anywhere! The mix of 'Scramble Santa' with 'Santa In Hell' and '3D Santa Berserk' seems to work rather well to result in something quite new. Hardly a 'great', but very good for that.

Control Keys: Cursor keys
Joystick: Sinclair, Kempston, Fuller, AGF, Protek
Keyboard Play: Awkward on the fast bits if you don't like the cursors, but responsive
Use of Colour: Smallish characters, but smooth, well drawn and very good scrolling
Sound: Good tunes
Skill levels: 1 with progressive difficulty
Lives: Six
Screens: Three
General Rating: A novel and seasonal game that turns out to be well worth it.

The mix of 'Scramble Santa' with 'Santa In Hell' and '3D Santa Berserk' seems to work rather well to result in something quite new. And no Bing/Como anywhere!