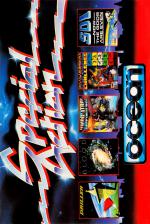 Ah me! Dontcha just love it when a new compilation comes along? And Ocean's Special Action compilation is no exception, featuring five games all of which date from within a year or so and scored well on their original release. So let's take a gander.

Driller was the first of Incentive's Freescape games, released in January last year. There have been four thus far, and every single one has been given our coveted Megagame status!! Freescape was revolutionary in its day, as was Driller, the first game offering a solid three dimensional environment for you to explore. The game is set in the murky future, long after Earth has popped its clogs. The human race now inhabits the planet Evath where essential minerals are being mined from the planet's moons. One of these mining moons has had to be evacuated due to a gas build-up and it's your job to get in there and release the pressure! You get to pilot two types of craft, seek out Rubicon crystals to replenish your energy, and teleport drilling rigs down to your position. With the skill graphics and the massive arcade adventure type gameplay Driller will keep you occupied for ages. I do feel though that it seems to be showing its age ever so slightly. For instance, the gameplay seems very slow. But if you like games that demand a bit of intelligence, instead of mindless zap-zap-zap,then Driller alone could justify the expense of Special Action! Rating: 90%

Ah ha, ma hearties, only the plumpest dead alien is good enough for the captain's table! Ha, ha, ha. Yup, it's the spooky Captain Blood, programmed by Exxos and released in May. This is the game that Sean reputedly said (according to the back of the box, Trainspotter fans) was 'bloody brilliant", except that he didn't, 'cos we're not allowed to say b****y! Hem, hem, oops. Actually, Sean scored it 68. As Captain Blood, your task is to scour the universe for five clones of yourself. To do this, you whizz about finding lifeforms and then giving them a good grilling. You can explore planets by flying a droid over them, which puts you in the game's arcade flying sequence, and jolly well rendered it is too. Rating: 75%

Jonathan gave this game from Imagine a big eight when he first reviewed it in November '88. He said that it was very unoriginal but very playable. A gang of aliens and their chief, Gog(?), have taken over the world. You basically have got to sort out a device (that's military parlance for a bomb!) that'll settle Gog's hash, high-tail it across the planet to Gog's lair, and then let him have it! These three sections then form the three separate parts of the game, the last two being a multiload. The first level is a monochrome shoot-'em-up where you run about a computer complex collecting bomb bits. Next comes some mindless zapping, when you fly a plane and later drive a jeep against a horde of foes. And then it's time to descend into the catacombs. It all looks very dated to me (Already? Ed) but I think Jonathan's comment about three average games for the price of one good one still holds true (except for the price bit, of course!). Rating: 70%

Well, Macca first looked at this one in November last year and rated it a seven. The graphics were outstanding and the different events sufficiently challenging to push your joystick skills to the limit. A multiload I'm afraid, but there is a large variety of events for Daley to show his prowess in. You start off in the gym, weight lifting, sit-upping and performing squats. Next you move onto Day One, where you get to participate in six events, the 100 metres, the 400 metres, the shot putt, the high jump, the long-jump and the 110 metres hurdle. The Day Two load has the remaining four events. These are the discus, the pole vault, the javelin and the 1500 metres. Some of these events are already familiar from the earlier games, but in a slightly revamped format. Gameplay is basically very monotonous, especially if your joystick waggling co-ordination is a tad squiffy! Mine is, I'm afraid, which means that I always lose! Hem, hem. Rating: 75%

I think David 'Fab Mackerel' McCandless was a trifle hard on this Activision game back in March. I mean he only gave it a six! It's not that bad. The game opens when your Star Wars satellite gets deposited in strategic place in space by your trusty shuttle. Then on come the bombs and things aimed at your homeland which you're aiming to destroy! True to the spirit of Missile Command with its joyball control, SDI features a weird and trifle-tricky-to-master control system. What you do is move a cursor out from your satellite to a point in front of a missile and then press fire. By clever plotting of your defence laser, you can destroy more than one missile per shot. If you let a missile get past, you'll have to fight a defensive section on the earth, shooting out all the separate warheads. Maybe not a 'rush out and buy' on its own, but as a part of this compilation I'm inclined to score it a little higher. Rating: 70%

Erm, and that's that basically! Hurrah! Although Special Action costs a bit more than a normal game, it's still actually two squidlies less than a Megagame like Driller used to retail for!! Perhaps a rather strange combination in some respects, and not every game here may appeal to you, but at least it doesn't contain any real duffers.

Largely a thinking person's compendium of popular titles. If you don'thave the main games, then it's a veritable barg!

Largely, a thinking person's compendium of popular titles. If you don't have the main games, then it's a veritable bargain!
Logout