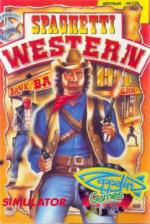 Yeeeha! Step into the world of the wild west: the world of ring dinging, cow hustling, and bucket spitting! It's all here in Spaghetti Western Simulator. You control a bounty hunter, tracking down criminals on the Wanted signs, making a living shooting people in the back and collecting the rewards. But beware: innocent people are out there as well as rootin' tootin' criminals and killing them costs you money!

The game is a little too slow: the screen scrolls along at a snail's pace, but the action is all fast moving! Graphics are sparse at first but as you get further in you discover well drawn houses, criminals and the odd dame to avoid shooting. It's a pity Clint Westwood, the main character, seems to be invisible - move him over a background aid his graphics assume the same colours. This obviously avoids colour clash but doesn't help playability. The only sound is the odd 'purling' when you tire a bullet. A tune would have been nice - you'll just have to stick the latest Depeche Mode single on to keep your ears happy!

A fun game when you get the hang of the controls: the action is fast and furious, but you may get fed up of being blown outta dat dere county (to be said with a wild west accent)!

Clint Westwood, the main character, seems to be invisible - move him over a background aid his graphics assume the same colours!