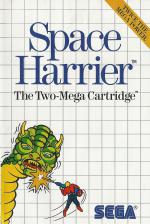 One of the first Megadrive games ever, this 3D shoot 'em up wowed the public back in 89 with its spectacular graphics and great sound.

Jaz: If you like your games to be more than a pretty face, give this a miss.

Matt: Fast and furious and great fun, but lacks a variety of gameplay to make it a total winner.

Jaz: I feel the same way about this now as I did then. It's fun, but hasn't really got enough in it to make it worthwhile for anyone other than die-hard Space Harrier fans - even at its new £20 price point.

Rich: Space Harrier never really appealed to me because it all appeared rather shallow to me. I think I'd knock 10% off each mark for this game. The gameplay is just too repetitive by today's standards.

It's fun, but it hasn't really got enough in it to make it worthwhile for anyone other than die-hard Space Harrier fans.