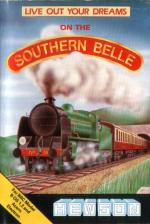 When steam locomotives were popular, many schoolboys had ambitions of becoming engine drivers. Even adults who were not steam engine fanatics often dreamed of taking control of a real train.

Now, with Southern Belle, you can re-live those days and try your hand at being a steam engine driver in the comfort of your home.

The ultimate aim is to travel from London to Brighton taking your place on the footplate of this King Arthur class locomo tive. A menu has seven options, including a demonstration run, various practise options and a problem run.

A demonstration run automatically engages after a minute and you would be well advised to watch this. It gives you an idea of the features and terrain that you are going to meet.

A leaflet explaining the principles of steam locomotion is included in the package.

The demonstration over, you should spend some time on the training run.

When you have mastered the training, and it will take a while, you can move on to more challenging schedules such as the record breaking run, set on July 26, 1903 at 48 minutes 41 seconds.

You must keep to speed regulations and be careful not to derail when going round bends - a regular occurrence in my attempts.

The screen is built round a central window containing a 3D graphic representation of the track, surrounding countryside, and the footplate.

The information display includes a digital clock, water, coal, and speed indicators, and a typical railside signal. There is also an indication as to your current position along the line.

The passing countryside and stations are depicted using 3D wire graphics. Unfortunately they aren't very smooth, jumping in big blocks as the train moves forwards, particularly when travelling at speed.

Sound is kept to a minimum and consists mainly of suitable hissing noises and the inevitable whistle.

There are two main things going for this program. The first is its originality. As an attempt to provide something new, it succeeds and I enjoyed reviewing it, if only for that.

The second is that a special Electron copy is recorded on side two of the tape. This ought to be adopted by other software houses more often. It must cut down production costs the benefits of which in time may pass on to the consumer.

This game should certainly be a hit with railway enthusiasts and simulator fans, but whether it will catch on with arcade addicts only time will tell.

This game should certainly be a hit with railway enthusiasts and simulator fans.