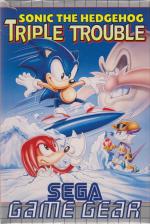 Cheeky Mr Knuckles, not satisfied with whipping up a right royal stink on the Megadrive, has finally managed to get his pink profile on the Game Gear. Sick to the back teeth of Sonic returning the Chaos Emeralds to the birds and bunnies, Robotnik has conned Knuckles into flattening the hedgehog once and for all - so much for being a good guy in Sonic And Knuckles...

Although loosely based on the madcap antics of Sonic 3, this is purely on a thematic level. The Acts have been re-designed, re-baddified, re-bonus-boxed, re-everythinged in fact. What's more, the character sprites have been given a quick dose of quick-grow potion and a splash more animation to make them the biggest and the smoothest to hit the Gear. Blimey.

Defeat the proverbial bad egg, Robotnik and Knuckles to retrieve the Chaos Emeralds.

Spines or fur, the choice is yours. Being such ace mates, there's no hard feelings when it comes to picking the best guy for the job. But Sonic does have a new trick up his sleeve with a new turbo sprint device installed in his boots, allowing him to scale new obstacles and loops. To counter this new power, Tails' twin turbo-ed derriere comes in very handy for bonus box collecting in those hard-to-reach places.

Originally the keeper of the Chaos Emeralds on Mobius, Knuckles teamed up with Robotnik after catching Sonic red-handed as he was trying to repossess the precious treasures. Conned by Robotnik into believing Sonic was the bad guy, Knuckles now sits at the end of levels waiting to throw our boys into a pit of lava.

Find yourself a TV set with a gem on it and you too can enter the bonus zone. Not quite the spherically scrolling action of the Megadrive, but still a huge challenge as you bounce from pillar to pillar and smash through walls to grab the goodies.

There just doesn't seem to be much more to do on the machine that hasn't been done before, and though this is the prettiest Sonic 8-bit game without doubt, much of the gameplay is bland, an adjective I never thought I'd use on the Maestro.

If you want Sonic at his Game Gear best at the mo, get Sonic Spinball, an as for a career relaunch - well, if Joanna Lumley can do it, so can you, kid!

Sega really have pulled out all of the stops in the visual department to make Sonic In Triple Trouble's backdrops and characters the best to grace the Game Gear. No longer do we have the scrawny-looking character sprites losing themselves in the foliage.

Quite honestly, these fellas wouldn't look out of place on the Megadrive! But the increase in size has obviously compromised the gameplay, as enemies are far and few between.

Unfortunately, this results in the game being reduced to collecting rings and spin-smashing through walls. Nothing new, I'm afraid, but fans of Sega's blue hero should be more than content.

Graphics 93%
P. The sprites are outstandingly large and super fluid to boot. Not to mention the fantastic backgrounds.
N. Shame there aren't more baddies to bash.

Sound 80%
P. The normal collection of bouncy tunes to egg the boys along.
N. Nothing new though.

Lastability 81%
P. The different playing styles of Sonic and Tails allow for exploration and an extended lifespan.
N. Difficulty setting needs to be tougher.

Value For Money 82%
P. A great looking product that will push the Game Gear to its limit.
N. But will be too easy to complete.