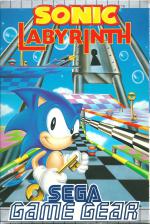 While Tails is busy fending off the backdraft on his private island, Sonic has found himself in altogether more surreal difficulties. Snatched from his platform paradise, our blur in blue has been deposited on a chequerboard hovering in a psychedelic sky. His only way out is to roll himself into a spinball and collide into various meanies, avoid sticky patches of chewing gum and slde across moving walkways until he can find the keys and rings to unlock his escape route.

Aside from his fleeting guest appearance in Bug!, Sega's mascot hedgehog is currently being put through his paces on just about anything and everything the Game Gear can throw at him. This time round, it's a fast-moving puzzle which sees Sonic batter himself through various obstacles with scant regard for personal safety. Shouldn't someone at Sega have put him on danger money by now?

I just couldn't get my head round this. The game moves in fits and starts as you find yourself being flung around at incredible speeds in the usually vain hope of passing through the right area (or hitting the right baddie) in your search for keys and rings.

Annoyingly, the degree of control you seem to be able to exercise over your fate is limited - you can get through each level with a bit of practice but you're left wondering how you did it.

Ultimately, the game is bonkers. And, sadly, fairly repetitive and frustrating. Oh, and a warning to hedgehog lovers - the level of physical brutality our blue chum has to endure is second only to the battering he received during Sonic Spinball.

Puzzles like this are perfect for the Game Gear - not too grand in scale and easy to tackle in short segments at a time, they make for excellent hand-held fun.

OK, Sonic Labyrinth is flawed, but everyone's favourite hedgehog behaves in character and some of the graphics brought back fond memories of the Sega coin-op.

If you're into puzzle games, pinball or even Sonic generally, this should appeal if you can get round its limited scope. And some of the cheeky little graphics touches are worth a grin.

I didn't expect too much from this, but it kept me amused for a while.

Graphics 75%
Sonic is in fine spiky form. Everything else is pretty basic.

Animation 66%
Nothing sophisticated. The high speeds the game plays at don't help.

Music 62%
Someone let that wasp out of that bottle.

Playability 73%
Quite an original and intriguing premise.

Overall 76%
A peculiar game, and an unsatisfying play.

Puzzles like this are perfect for the Game Gear - not too grand in scale and easy to tackle in short segments at a time. However, Sonic Labyrinth is a peculiar game, and an unsatisfying play.