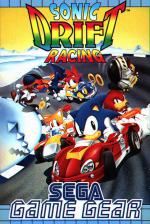 If you lived in the same street as the Sonics and the Marios, it would probably drive you barmy. First the Marios get a satellite dish in, then the Sonics appear with one. Then Tails arranges for Chez Sonic to be stone-clad, and what do you knw, Luigi does the same next door. Then the Marios star in a go-karting game, and inevitably so do the Sonics. But to go one better they have two. Except, instead of the Megadrive being graced by them, the pleasure is solely that of the Game Gear.

You won't have seen Sonic Drift. Sega UK passed over it, though it did quite well in Japan. The reason Sega UK ignored it? It was a bit crud. The sequel, however, does get their seal of approval. So for the first time in recent memory, there's a good reason to exercise your game-link cable and snuggle up to your Game Gear owning friends.

A sequel to Sonic Drift, a previous Game Gear racer which was not released in the UK.

Beat your three opponents over six circuits, or a single human opponent in the link-up game.

There are seven different Sonic characters to choose when playing Sonic Drift 2, each with variable attributes and skills. After you have selected, the computer picks three opponents at random from the remainder, effectively making the race different each time. You have the choice of:

There is a choice of manual and automatic transmission. Manual is quite tricky as you have more than just acceleration to worry about during the game. Each of the drivers has a special power with which to spike his opponents Eggman can throw mines in front of other cars, Sonic has a speed dash, Amy leaves her opponents hopelessly lovestruck, etc. Each usage costs two rings, which are collected from the track. The powers of the other characters also come as power-ups occasionally found on the track.

The game supports a link-up option that is considerably more fun than the solo game. A special six-track head-to-head area has been assembled. Power ups and special skills give it a tactical edge.

The courses of the three separate cup competitions are pretty varied. Some are circuits, while others come as linear races split into stages. Some, like the Desert tracks have high-banked corners, others have no track barriers, allowing the cars to fall into the abyss. The Savannah track has the neat effect of a thunderstorm in the background, blinding your view frequently with lightning flashes.

This year will see a glut of Game Gear stuff, and if it's as good as this I'm going to be permanently connected to my handheld. Sonic Drift 2 is just great with two players, the graphics are fab and the variety of the tracks deals with any problems of repetitivity. The presentation brings the package together with umpteen combinations of match-offs between the seven characteers. Even in solo mode, the playability is superb, with great response and white-knuckle finished almost every time. Simply the most desirable purchase of 1995 for Game Gear so far.

I haven't enjoyed a Game Gear game as much as this for ages. Sonic Drift achieves the virtually impossible by emulating Mario Kart on the relatively humble handheld. As a one-player game, Sonic Drift is excellent thanks to its variety of courses, hazards and the intelligent computer racers, but it is in the two-player mode it starts to shine.

Racing another player is great fun, and every icon and obstacle must be used to your advantage, giving the game a real addictive edge. This is a brilliant game, and the perfect reason for buying a link cable.

Graphics 91%
P. Colourful and upbeat, with nicely defined cars. Watch as you get the thumbs up at the start.

Sound 88%
P. Suitable music to go with the game's pacey action.
N. No engine noise, but none expected with the Game Gear's farty low notes.

Value For Money 92%
P. Sega are making a special effort to undercut the going rate by some three quid.

Overall 92%
The first Game Gear title to inspire itchy thumbs for a while. Get going and get it.

This is a brilliant game, and the perfect reason for buying a link cable.