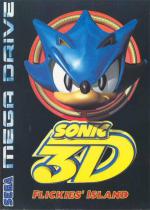 Oi! Megadrive owner! Yeah you! Are you tired of hearing that your system is dead? Tired of reading that Sega are no longer supporting the 16-bit format? Tired of the lack of decent new software available for your machine? Well quit whining and cop a load of this: Sega may have just the answer to your prayers...

What do all of the Sonic games have in common? Apart from the fact that Sonic's in them, I mean? Give up? They're all flinkin' ace, aren't they?! Particularly Sonic CD on the Mega-CD which is still a Mean Machines Sega favourite. So when Sega announced that they were producing a new Sonic game, we all sat up and took notice. Especially when we heard that this particular Sonic game would be on the humble Megadrive... and in 3D!

After the recent shock announcement that Sonic X-Treme (set to be Sonic's first Saturn outing) was killed in mid-development, all eyes are now on Sonic 3D to see in which direction Sega wish to take the Sonic series. Licensing out the franchise to Travellers Tales (responsible for the amazing Toy Story) is a bold move, but has it paid off?

Destroy the badniks, rescue the flickies and deposit them in the giant gold rings.

What would a Sonic game be without Dr. Robotnik (Eggman in Japan) and a full complement of his evil minions? Sonic 3D's many levels are absolutely chokka with dastardly robots and treacherous traps which vary depending on the theme of the zone. What's more, the end zone bosses in Sonic 3D are some of the most spectacular Doctor Robotnik encounters yet seen in a Sonic game! Have a look for yourself!

While the structure of Sonic 3D remains much the same as in previous Sonic games (each zone has two stages followed by a boss) the game objective has changed significantly. Rather than just have Sonic dash for the end of each level (as with previous Sonic games), this time Sonic must first locate and collect a number of Flicky birds which he needs to open the stage exit. These birds are hidden within the robotic shell of enemy Badniks, and only by successfully Spin Dancing them can Sonic free the fluffy Flickies into his possession. This adds an element of exploration to the game, as Sonic must search the various levels high and low to find the elusive birds.

Making a return to the world of Sonic are the now familiar power-up consoles, dotted about the landscape. These bonuses are now even more crucial to Sonic's success than ever before, so here's a run down on what to look out for.

One of the Sonic series' key assets has always been its simple "one button fits all" control system. However, while that was fine for a 2D environment (where Sonic could only move left and right), it doesn't really suit Sonic's 3D isometic universe. To cope with the added dimensions, Sonic 3D introduces a new button to replace the up and down functions on the D-pad. While A and C make Sonic jump as per usual, the B button makes Sonic curl up into a ball and roll (or charge a roll). Sonic can also perform other actions during the game such as pirouettes and loops, though these moves are only accessed by using certain objects dotted around.

Like all Sonic games before it, Sonic 3D features an incredible 3D special stage just waiting to be discovered. By collecting 50 rings and locating one of Sonic's hidden pals (Tails and Knuckles) Sonic is warped to a special stage where he must cross a narrow bridge, dodging spikes and collecting rings in order to reach the Chaos Emerald at the other end. There are eight emeralds to collect, and the stages vary slightly between Tails and Knuckles.

For once, I'm speechless. I must admit I was a bit sceptical at the idea of Sonic's first 3D outing appearing on the humble Megadrive, but once again Sega have proved my worries groundless. Sonic 3D is a legitimate addition to the Sonic series, and a smart game in its own right.

Yes, the change of game style may deter some Sonic purists, but in my opinion it's about time someone added some depth to Sonic's simplistic "race to the end of the level" structure. The rendered graphics are fantastic (and not at all inappropriate), the music is surprisingly good and the gameplay is rich and rewarding.

Travellers Tales have got the control and inertia of Sonic over the 3D terrain absolutely perfect, and are to be commended. In fact, the only sign of rain on this parade is the game's difficulty level: it may be a tad too easy for experienced gamers. Still, I said it with Toy Story and I'll say it again - as long as games of this quality keep coming out for the Megadrive, 16-bit will not die!

Travellers Tales seem to be re-educating the world about the Megadrive single-handedly. Sonic 3D's graphics are a gob-smacking marriage of speed and detail. The game is a total departure from the Sonic series - which some people have been demanding for ages.

I don't think it has quite the same instant appeal, but you can't complain about Deja Vu. There's massive depth, the game idea is cool (only the bonus level lets it down a bit). But what Dan says about the difficulty level is true; this is probably even easier than Sonic 1!

Animation 93%
P. In a word, amazing. SGI workstations put to good use on the Megadrive - Donkey Kong Country eat your heart out!

Music 92%
P. Catchy tunes for each zoom, with remixes for the second stage!

Effects 90%
P. You'll recognise the effects from previous Sonic games.
N. Not quite the same advance as in other areas.

Playability 91%
P. The control and inertia of Sonic is perfect, and the whole experience is fast, furious fun.

Lastability 90%
P. Huge levels, and there's Chaos Emeralds to think about.
N. It may be a tad easy for experienced gamers.

Overall 92%
What's that, from inside the Megadrive coffin? Is that... breathing? My God, it's still alive! Quick, get it out! Get it out!!