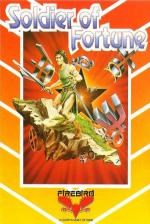 In the last few months, the legal wobblies over Graftgold have tended to cause more excitement than their games. In the battle between Hewson and Telecomsoft over the rights to programmers Andrew Braybrook and Steve Turner's work, no-one seems to have come out best. So far, Firebird have come up with Magnetron (very much a re-run of Quazatron) and Morpheus, a pretty but unplayable shoot-'em-up.

You'll want to know the plot, although frankly it's the normal sword-and-sorcery tosh. Evil mage Krillys has unleashed a horde of demons on the world by damaging the Zodiac Power Source. Your task, as either Tartarus or Teron (or both in the two-player version) is to find the Source, return it to its rightful place and save a whole forest full of grateful pixies.

Tartarus and Teron can walk, run, jump, climb and open doors, all under joystick control. In two player mode, the game "camera" attempts to follow whichever player pressed his fire button first, so it's in your interest to stick together. If the other player disappears off the screen, he will lose energy swiftly.

The Commodore version has very poor background graphics of trees, platforms, ladders and walkways. The monster sprites dance around smoothly while the screen scrolls around, but the design is so poor that you can't make out what most of them are supposed to be - bats, wolves, whatever. In fact, the whole production looks like a second-rate version of Ghosts And Goblins, with only the excellent theme music and spot effects feeling more up-to-date. In contrast, the Spectrum version looks completely different, with larger, more interesting sprite designs, nicely detailed status indicators and decorative screen borders. They're like two completely different games, and the Spectrum version is immensely superior.

What they have in common is the basic plot. In order to complete your quest you have to collect magical tokens, find your way through mystic transporters, and obtain new weapons to protect you against ever more ferocious enemies. In the Commodore version, you can enter shops in villages, and, if you have found golden tokens, trade with the villagers for extra weapons, shields, keys and scrolls. The trading sequence is graphically uninteresting and doesn't add much to the game, so it's no loss that the Spectrum version doesn't have one; here, it's just a matter of finding tokens hidden on the bodies of dead adventurers, and collecting enough to earn you the protection of a guardian spirit as you fight against the final monster on each level.

The Commodore 64 version, then, is a dead standard, pretty boring pot boiler which does little to add to Graftgold's reputation. The Spectrum version, in contrast, is interesting and imaginative, featuring touches like flying platforms, giant monsters and imaginatively designed sprites which make it more than your run-of-the-mill pixie shoot-'em-up.

An interesting and imaginative game, featuring touches like flying platforms, giant monsters and imaginatively designed sprites which make it more than your run-of-the-mill pixie shoot-'em-up.