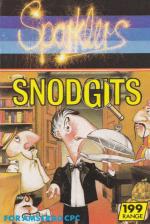 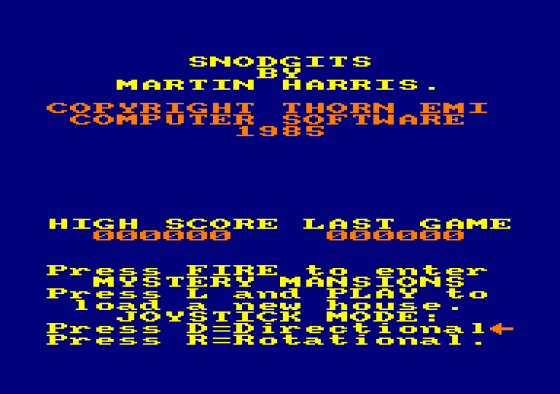 It's a little unfortunate that the instructions for the game are much more complicated than they need be and will probably confuse you no end before playing. Once you have played the game you'll realise how simple in fact it is.

It takes place in one of five different mansions recorded separately on the tape. These all start off with two floors and a number of rooms shown on screen in very big 3D graphics. It's often difficult to tell exactly what's going on and to control your character Benton the butler accurately but this isn't much of a drawback.

As the butler you have two tasks: to serve the Snodger family who live there, and to discover the culprits who have been stealing things from the house. A member of the family will ask for an object which you have to find and take to them. When you do this you get a chance to solve a clue and identify a thief. Catching a snodgit will give you another crack at it if you got it wrong. 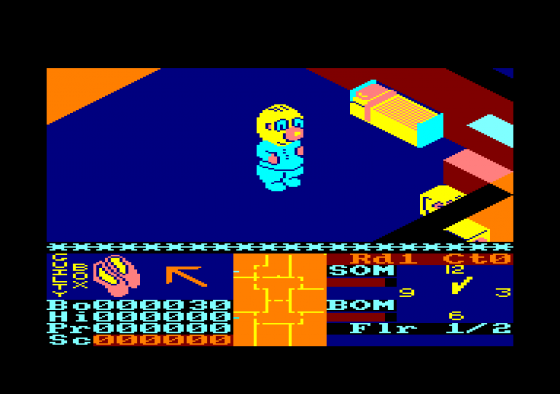 Once three thieves have been caught you move into a bigger mansion in which to solve the crimes. The graphics are certainly big and bright, but don't really look very good. The game is quite intriguing to start with but once you've worked out what you're supposed to be doing there are a number of lingering frustrations that cause problems.

The graphics really take chunkiness too far and the colour scheme's revolting, but the gameplay is certainly original and entertaining. Ugly, but fun.

A considerable improvement, as far as I'm concerned.

N. Unnecessarily confusing instructions.
N. The game could be simplified slightly to its own advantage.
N. Graphics don't help the gameplay.

The game is quite intriguing to start with but once you've worked out what you're supposed to be doing there are a number of lingering frustrations that cause problems. 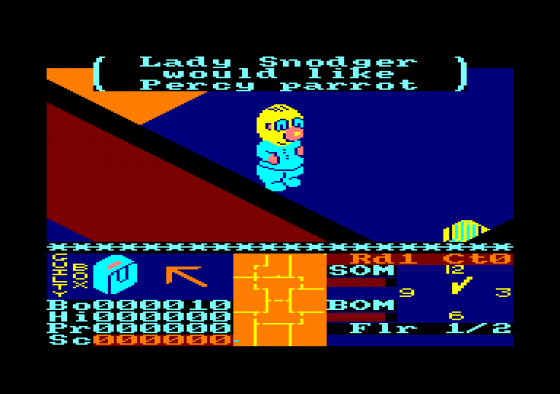