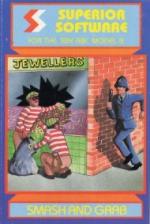 With a swift kick you send the police traffic cone crashing through the bank window. Bags of money begin to fall from the broken window and drift gently down towards the river below...

In Smash And Grab (Superior Software) your job as the villain is to catch the falling loot before it reaches the river.

As is always the case in these ladders and levels games there is a snag. In this one it is in the shape of PC Plod, your local neighbourhood bobby.

This particular policeman would be more at home in the Sweeney than pounding the beat. Dirty Harry was modelled on this guy!

Should you be running along the level directly above him he is quite likely to leap upwards and thrust his truncheon through the floor into your nether regions. When he is on the upper level his actions are even more dramatic as he falls flat on his face and batters you around the head.

To complicate things further the occasional trio of flying traffic cones will wing their way along one of the levels in your direction. These can be dealt with by either getting out of the way, or by kicking each one in turn by pressing Return.

Although it may sound that the odds aren't exactly in your favour you do have one trick up your sleeve. Should you kick one of the four police boxes when the light on top is flashing the traffic light at the top of the screen changes to red.

Immediately the bags of money stop falling, and any physical contact with the policeman will send him plun ging to the water below. The traffic lights change to red and amber before the policeman becomes active again.

If you can collect eight bags of money you progress to the next screen. However as each missed bag of loot hits the water an alarm bell appears at the top of the screen. Five alarm bells and a life is lost.

The element of humour provided by the "hit first, ask questions later" policeman prevents the game from be coming just another "ladders and levels" clone.

Other BBC Model B Game Reviews By Jon Revis

The element of humour provided by the "hit first, ask questions later" policeman prevents the game from be coming just another "ladders and levels" clone.