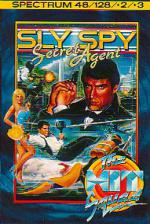 Forget about manky old James Bond and his smooth talking charm, Sly Spy is what real secret agent tomfoolery is all about. The king of tomfoolery Steve Keen explains...

Sylvester is the dashing hero behind the British Secret Service's latest offensive against their arch enemies the C.W.D. (Council for World Domination). His adventures are spread over nine Martini shaking levels and split between such leisurely pursuits as sky diving, motorcycling, pugilism, walking and scuba diving. During the game you'll be called upon to do all these whilst an assortment of criminals of both the two and four legged (?! Bad dog bozo!) variety, try to riddle your tux with tooth and bullet holes.

The adventure starts off with a 10,000 foot parachute drop into enemy territory where the skies are full of pistol touting enemy agents and villains. You'll progress to ever more dangerous levels as once you've finally landed the thugs you avoided in the air take to motorbikes and jet packs and pursue you throughout the city. There are loads of pickup power icons to protect our hero in true 'Q' style and you'll also notice several strange looking pieces of shrapnel lying around the place. These make up the Golden Gun, (now where have I heard that before) which, when put together form a formidable, if slightly short lived, weapon.

The blue and white graphics, although crisp, do look a little old hat. They are, however, well drawn and could knock a few more recent games for six. The action is unrelenting with just the right pitch of difficulty and variety to keep you coming back for more. A really kicking release that's gaggin' for a purchase.

Fast, action packed and fun to match, I hear Roger Moore learnt everything he knows from this game, including acting! Give it a whirl.

The action is unrelenting with just the right pitch of difficulty and variety to keep you coming back for more.