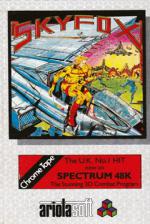 At last this superb air combat game is available for the Spectrum.

The original C64 game was reviewed in Computer Gamer back in August last year and, since then, Spectrum owners have been waiting for it. They won't be disappointed.

Although the game is almost totally in black and white (to avoid any colour smudging) there's enough action and variety to keep most players happy.

Your mission as the pilot of Skyfox is to defend your home base from attacking aliens who come at you in tanks, jet fighters and, of course, motherships. The motherships are the most difficult to handle since not only are they difficult to destroy; they also launch tanks to add to your problems.

To help you with this onslaught, your Skyfox fighter is equipped with front-firing lasers and a limited supply of heatseeking and guided missiles.

If you run low on fuel or need repairs to your shields then you can return to your base. If the base is destroyed then you're literally on your own.

The screen display shows the 3D view through the cockpit which dips and rolls as you fly over the landscape. Things get a little jerky when there are about six planes in front of you but a few well-timed laser bolts should cure this.

Your Skyfox is also fitted with an onboard computer to help you plan your defence and an auto-pilot that will take you straight to the action.

Add to that lot the choice of five different skill levels and a choice of fifteen different scenarios including training missions and different enemy attack formations (including my favourite, the aptly-named 'Alamo') and you have a good conversion of an excellent game.

A good conversion of an excellent game. Despite it all being in black and white, Spectrum owners will not be disappointed.