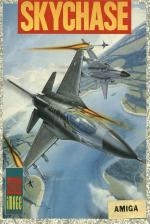 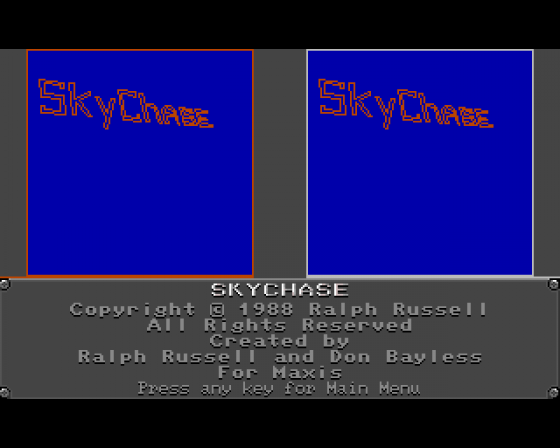 I was going to start this review by telling a joke about The Village People singing 'In The Air Force' but I didn't think it was very funny, so I won't. I'll talk about the game instead [Yeah, good idea, Maff - Ed].

Sky Chase is set in Fightertown USA (No, I've never heard of it either!) where new Air Force recruits are trained. You take the part of one of these recruits as he embarks on a flight test which consists of head-to-head aerial dogfights set within a restricted area.

Obviously, the Air Force don't want to have expensive planes destroyed by rookie pilots blasting each other out of the skies (the paperwork for trainees killed is horrendous) so all the flying takes place on computer simulators against the machine or another cadet in one of seven types of aircraft: from an FA/18 Hornet to a paper aeroplane (believe it or not). 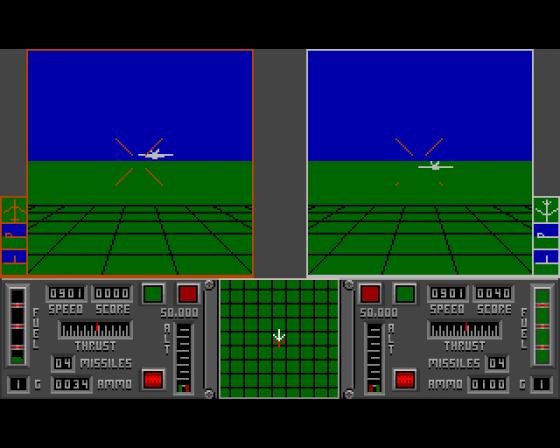 The display shows a first person view from the chosen fighter with your opponent displayed as a wire frame plane in your display - plus the view from their plane. If you think you're suitably hard, you can switch off the computer's display in one-player mode and rely purely on instruments only to catch the enemy.

Along with the choice of plane, various other options can be changed on the title screen. They include grid size, G-force tolerance, bullet strike area and other details.

There are very few flight simulator games that I really enjoy playing, Starglider 2 and FA/18 Interceptor being notable exceptions, but Sky Chase appealed to me partly because of the simplicity of the action, since controls have been kept to a minimum.

Only the bare essentials for flying and shooting have been included, so you don't end up being shot up the tailpipe while you're looking for the right button to press to do a loop.

The only serious problem is that once you've played a couple of games in single player mode, it becomes rather easy to kill the enemy fighter with a couple of simple manoeuvres.

In two player mode, however, the action is extremely exciting and frenetic. In fact, this comment took a while to write, because Wayne (from the Art Department) kept coming down and tempting me to play the game. If you're one of those people that enjoys a good gaming session with your mates, then this is a game for you.

Anyone who hates the incessant gauge-watching of ordinary flight sims needn't shy away from this product either, because although there's an extensive control panel, you only really need to refer constantly to one display - the Radar.

This lets you get on with the pure dogfighting, which is exciting stuff, especially with a good human opponent - there's a simple manoeuvre which beats all the computer opponents every time. The enormous flexibility of the game is also worth a mention, with enough options to customise just about everything on your aircraft short of painting snarling teeth across the nose!

Anyone remotely interested in fast airborne action should check this out as soon as possible.

Before I start, I'd like to say that just because there isn't a 'thumbs up' face on this comment, it doesn't mean that this game isn't good.

All it means is that it should be better. The actual gameplay is excellent; the controls are easy to use, the graphics are fast and effective and the sound adds the right amount of atmosphere.

The problem lies with the single player option - it's just too easy. Nine times out of ten you can loop around and blast your opponent out of the sky with your first shot.

The only way to really play is in two player mode, but people may find that they are lacking the required number of players for a duel (message for the very stupid: that means they're on their own).

If you're on the look-out for a decent two player game then this is it. Otherwise, play beforehand to see if this is what you really want.

Presentation 93%
Very easy to control with a wealth of options.

Overall 78%
An exhilarating flying game - at its best with two players at the controls.

An exhilarating flying game - at its best with two players at the controls. 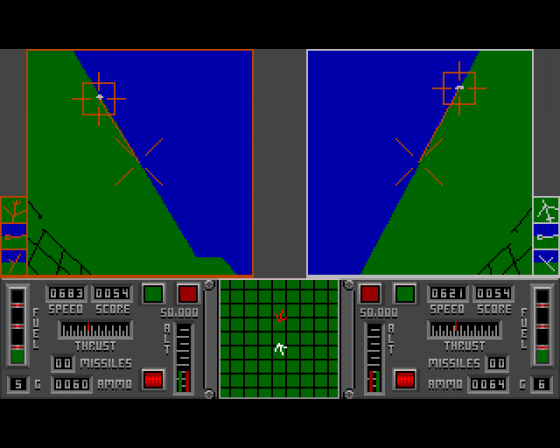