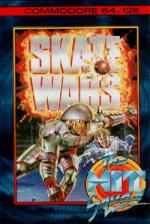 Ice skating... what a load of tosh, eh? I mean, you slide around half the time on your bottom (just like Joanne Conway!). I can hardly stand up at the best of times - which isn't surprising when the only ice I'm interested in is my Scotch on the rocks! And I couldn't tell a triple Alex from a double Salko in a million years, let alone perform one!

Mind you, ice hockey's a bit more like it - all that body-checking and fighting. But if you think that's rough, you haven't seen the future-sport of Skate Wars. Not content with barging each other, the players try to knock each other into various deadly traps like spikes, holes and liquidisers! The main objective, however, is to knock the ball into the opposing goal.

There's three players per team (chosen before the match), but only one gets to play at a time (plus a computer-controlled goalie). Lose all three and it's game over, and five bonus points to your opponent. Ironically, if you're more than five points ahead in a two-player game, you can deliberately kill off your team to win!

The solo game has you playing through no less than 99 levels, each played until five goals are scored by one of the teams. Early levels are pretty dull, but as they get littered with more traps and obstacles, things get more interesting.

Add to this some very crude graphics (they were poor two-and-a-half years ago) and sparse sound FX, and you're skating on very thin ice.

There's not a lot to the game really: just barge the other skater off the ball and race for goal - the computer-goalie is totally useless.