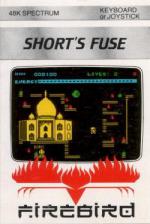 This is another of Firebird's budget games, but one that doesn't match up to some of the others in the range. The game is very similar to that old favourite, Chucky Egg, but is not nearly as addictive. Instead of collecting detonators' to defuse bombs left by a chap called Boris.

As well as the platforms, elevators and ropes, each screen has a picture of some famous landmark, such as the Taj Mahal, but these seem to be for decoration only, adding little to the game itself.

I'm afraid that I simply found the game too hard to play. Having spent a couple of' hours on the first screen I gave up in frustration after being stopped by the same obstacle on each attempt. There's a time limit on each screen which is far too brief - if you pause to time a jump, the 'game over' message seems to appear in seconds and I found this enormously irritating. Equally irritating was the tune that played between games and after losing a life.

Black marks too, for the control selection. The first time I tried to select the keyboard controls using the "user-definable" option, I made a mistake only to find that I couldn't redefine the controls and had to reload the game all over again. This constitutes an enormous pain, and makes a bad first impression.

Potentially an enjoyable game, but too "unfriendly" for me, I'm afraid.

Potentially an enjoyable game, but too unfriendly for me, I'm afraid.