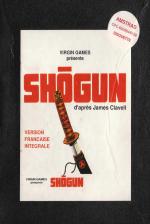 Urgh! It had to happen eventually, didn't it? The extraordinarily thick book by James Clavell, featuring lots of ritual killing and men in skirts has been converted for "lucky" Commodore and Amstrad users. (Although one suspects that perhaps the TV serialisation provided more inspiration...)

The Amstrad version was reluctant to load, and it was necessary to try the second side of the tape before the title page appeared. Continual attempts, though, produced the desired effect and the program was ready to go.

The game is icon-driven, and by positioning the cursor over the appropriate picture you can manipulate objects and talk to people. The aim of the game is to move around the land and collect followers. Once you have achieved the necessary quota, you'll be informed of your mission (i.e. the rest of the game).

While you travel around, text will flash up on the bottom of the screen to inform you of events which have been going on in your absence (quite handly for keeping tabs on your friends and foes when you are doing something else).

Should a character decide that he doesn't want to join your merry band, you can always try a little physical persuasion. Some of the more ignorant types will continue to fight though.

The Commodore version is by far superior to the Amstrad with better sound, steady graphics, and far nicer text. The C64 version has good music and sound effects. It's also easier to select an icon.

Although the game is entertaining, it didn't hold my interest for long. If you had the time to sit down and plan your game activities properly, it would appeal more.

Although the game is entertaining, it didn't hold my interest for long. The Commodore version is by far superior to the Amstrad with better sound, steady graphics, and far nicer text.