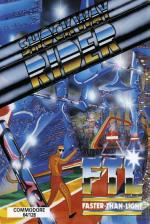 Nobody walks in the city of the future. Technology has advanced so far that the paths move, while people do nothing more than stand still and wait until they reach their chosen destination. This modern Metropolis is hardly paradise though, its streets are dangerous - and its moving pathways even worse! Not everyone's a criminal however, in fact you're the very opposite - Greg 'Cobra' Follis, the world's toughest vigilante (with the world's most terrifying sideburns). Taking it upon yourself to clean up the city's sidewalks, you decide to start by sanitising the eight levels of moving pathway.

The circular pedestrian pathway is divided into three parallel sections which run at different speeds in the same direction. The walkways are seen in perspective, with the characters changing size as they move 'in' and 'out' of the screen.

The objective is to complete the circuit within a set time limit, killing as many characters as possible. Fists can be used initially, but the stationary pathways alongside are littered with bricks or spheres which are far more effective. Extra lives can be obtained by collecting objects or shooting innocent bystanders - depending on the level. For example: on Level One, an extra life is awarded for shooting five bystanders, while collecting seven mailbags does the trick on Level Two.

Having completed a circuit, the player automatically progresses to the next level. Being sensible as well as hard, you tackle the walkways in order of increasing danger - so as you go on there are more bad guys to flatten and more obstacles to avoid.

Future City's thugs are slick, and down on Moving Mean Street they're identifiable by their pink, cut-off T-shirts and natty shades. But don't be fooled by apparently innocent commuters and passersby; that frail-looking granny may turn into a mugger at any time. The safest bet is to kill everyone in sight!

Unusual but playable games are few and far between these days - and Shockway Rider certainly fails into this category. The concept is very simple, but it has an oddly addictive quality - marginally offset by the lack of any real variety between levels.

The presentation is polished, with a thumping good soundtrack and one of the weirdest title screens I've ever seen. Not really an essential purchase, but interesting nonetheless.

In essence, Shockway Rider is hostile hop-scotch played on three moving levels. It doesn't look particularly inspiring, but the concept is commendably original, and has been superbly executed to produce a gorgeous game.

Progress is entirely skill dependent - there's no real fixed pattern, and while one game will go incredibly well, another can go disastrously wrong. There's a thin line between addiction and frustration, and the programmers have got it just right - congratulations to all involved.

Don't walk: boogie! Mug the muggers and soft-shoe shuffle the walkways of the future! Shockway Rider is one of those strange concepts that only see the light of day because computers exist.

It's fun to play, addictive with a capital 'A' and amazingly frustrating. The music initially sounds the sort of superfluous, boppy pap we have to endure every Sunday, but once you get into it... it's brilliant - I couldn't play without it! Don't be a lemming and follow the gullible hordes who rush out and buy the latest big name licence - try this original and refreshing product and find out just how brilliant computer programs can be!

Presentation 97%
Simple but effective title screen, useful on-screen information, plus a demo mode, a practice option, a pause mode and a restart feature.

Sound 84%
The choice between a few neat spot fx and a suitably lively Rob Hubbard soundtrack.

Overall 86%
An original and deceptively playable game - and a worthy Light Force follow-up to boot.

An original and deceptively playable game - and a worthy Light Force follow-up to boot.