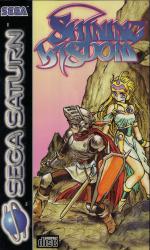 The Japanese and RPGs seem to go together like Bubble and Squeak, or throwing up and alcohol. To put it bluntly, hand in hand. In particular, the Lunar series and the Shining series have been extraordinarily popular, with mass coverage in the Japanese specialist press. They go bonkers for a quest to rescue the kidnapped Princess, whist roaming ancient lands and defeating the minions of an Evil/Dark warrior. And it's not just restricted to the Sega side of proceedings. Nintendo have had phenomenal success with Zelda and the forthcoming Mario RPG is causing more than its fair share of excitement.

But, until recently, the European public has been immune to the craze. RPGs would be shipped in by Sega in small numbers and under cover of darkness, almost apologetically. Shining Wisdom is a surprise conversion of the Japanese game - a surprised because we were reliably informed that it wasn't to be arriving on these shores. But, lo and behold, it plops into our palms, courtesy of a new release policy at Sega UK.

While many events of the previous games are remembered and the original characters are part of your new hero's ancestry, the old format of the game has been abolished, and has been replaced with a Zelda-style adventure. Gone are the long drawn out battle sequences, and in are real-time skirmishes on a smaller scale. However, the plot and feel of Shining Wisdom, the tracking down lost objects and finding the Dark Forces have strong resonance with the Megadrive titles in the Shining Force series.

Not so much in common with Shining Force as the Zelda series on SNES. A classic Jap-style RPG.

Rescue the Princess who has been turned into a swan, and stop the Dark Elf from destroying the land. Bwa Ha Ha.

The first thing you are required to do in the game is beat up your old grandad, who has nurtured you since your mother and father died a few years back. You don't exactly beat him up, but use your Acceleration attack on him. This is basically a form of speeding up and, couple with the right Orbs, can make a potent weapon. By pressing any of the top three buttons, the numbers underneath your energy bar will start to rise.

When the highest number is reached, then acceleration is at its peak, and that is the time to use it against some of your enemies, in the first case, old grandpa. By running into him and knocking him to the floor, he will tell you you are ready for your journey, and you will begin.

The area you had to wander around in Shining Force was pretty vast, with towns and secret caves to visit at your will. Wisdom seems to have somehow increased the overall game map, and still added lots more towns and sub levels to look at, and caves to dive down. Take a look at the map, and where each of the towns are.

Reach the Royal Crypt, and if you are going along the right tracks, you should acquire a pair of Heavy Boots. These are used to jump through sections of the floor that have become weak in their old age. To finish the mini level that is the Crupt, you have to find the section that will lead to the boss once it is smashed. Find the area with a single weak spot, and jump on it to fall down to meet the gang of Elves.

The Odegan City, located just before the Castle, contains the first shop you should make a point of visiting. The items it contains are pretty useless on the face of things, but become essential as you progress.

The Angel Wing should be brought, to enable a quick warp back the entrance of the dungeon or cavern you are in. The Magic Book gives you the opportunity to save the game whenever you enter a new stage, which is naturally useful, so take two. Medical Herbs never go amiss, replenishing your energy completely in the early stages of the game. They are also cheap, which helps.

The game map is split into two halves, and when you begin, the east side is the only side you have access to. Until you manage to find the Power Glove, then the west side is out of bounds. The only way to get to either side is by the caverns just above the castle. Once inside, you'll se that your way is blocked by spikes, but it is possible to sneak through, even if energy is lost.

Charge up your accelerator to full, and then keep running until you touch the statue in the centre. After you have sustained about three or four hits you should break through, retracting the spikes, and continuing your progress. Once you have the glove however, you can fire that at the switch to lower the spikes.

When you have progressed a little further into the game, more and more weapons become available to you. Some of these are vital as you cannot progress without them (For example, The Mole Gloves and Heavy Boots). Others, although important, will aid you in some different areas. Bombs, for example, will open up all sorts of hideaways when placed in the right spots. Keep an eye out for cracks in the rocks to lead to secret sections.

Fans of two of the all-time greats, Shining Force and Zelda (Super Nintendo) will be in their element with Shining Wisdom. It's quirky, and very Japanese, a style of game not usually attractive to Sega, but the new mood there me see more of this game.

Being brutally honest, the graphics are not that great, the sound is irritating, but once you've got the initial plot, there's acre of dungeon real estate to wander through, and oodles of action.

Yes, it's fair to say that this was my most eagerly awaited game so far on the Saturn. And at this moment in time I can faithfully report that I am not disappointed with this at all. In fact, it's awesome.

The fact that the whole graphical look of the game has been changed brings fresh feeling to the idea, and the slightly tedious battle sequences have made a short trip to the bin, and been replaced with the wandering hero-type game. The action is very similar to Zelda, which some may view as a gripe, and others as a good thing. Personally, I think it's good, as Zelda was one of the best SNES games ever, and anything that bears resemblance to that is setting off on the right foot.

The graphics are smart on the whole, and convey a mystical and adventurous feel. Typical RPG tunes that change in each location are also part of the package. But it's the playability and lastability that really make this the game that it is. It's just so addictive, enticing you to find that elusive object and then carrying on playing until you find its main use, and using it to open another part of the map.

It's bloody hard as well, so progress may not be as quick as you may think. So, the Shining team have done it again with another top notch role-playing game. If you have any Wisdom, you'll buy this.

Graphics 83%
P. Some sections, like Dungeons, are pretty well drawn.
N. But some of the enemies are terrible and other sections are bland.

Animation 80%
N. Not the game's strongest point by any means. Poor all round.

Music 87%
P. Despite a limited amount of tunes, they don't become repetitive at all.

Playability 94%
P. You won't find a more playable RPG anywhere. With so much to do, it'll keep you hooked for ages.

Lastability 95%
P. How hard is this? Bloody difficult, that's for sure. Weeks of play are in here, and you won't find everything on your first go.

Overall 92%
Another top notch RPG romps home from the Shining team. Despite a change in basic formula, everything holds together well. Superb.

Another top notch RPG romps home from the Shining team. Despite a change in basic formula, everything holds together well. Superb.