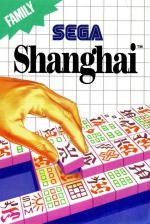 Shanghai isn't new on computers - Activision released it a couple of years ago on various formats - and now it's arrived on the Sega. It's based on the old oriental board game Mah Jongg. There are 144 tiles arranged in a pyramid and the objective is to remove matching pairs from the pile. This is more difficult than it sounds since it's only possible to remove them all in 72 consecutive moves. And removing the wrong tiles means that you're left in a situation where there are no matching pairs left. It sounds off, but in practice it's quite straightforward.

The rule that makes the game difficult to complete is that tiles can only be removed by sliding them off the pile either to the left or right if there aren't any other tiles blocking them in. There are four types of each tile, so selective removal is necessary so you don't end up blocking pairs in.

The Sega interpretation of this strange game is viewed from above. A joycard-controlled cursor is used to highlight tiles, and fire either unhighlights them or removes them from play. If the move is illegal a beep sounds and the player has to select new tiles.

There are three types of game: solitaire, tournament and challenge. Solitaire is straightforward: just remove all the tiles from the board. Tournament is a multi-player game where the players take turns to remove tiles from the board - the player with the most tiles at the end of a game is declared the winner. Finally, challenge is played by two participants, and the objective is to remove as many tiles as possible.

During play a drop-down menu can be accessed to identify a tile, back up a move, request the computer to show all moves available - a help option in other words, peek at tiles underneath (which is cheating) and change the background music (there are two awful tunes and one which is listenable).

I found it difficult to get excited about Shanghai. The presentation and graphics are great, and the game itself is quite therapeutic - it certainly makes a change from blasting aliens - but in the end it all gets rather tedious. I'm all for unusual adaptations of board games, but I'm afraid this one doesn't make a particularly thrilling or addictive computer game.

I'm all for unusual adaptations of board games, but I'm afraid this one doesn't make a particularly thrilling or addictive computer game.