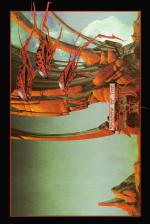 You thought you had foiled the Beast Mage's evil designs in Beast 1, didn't you? Well, in this sequel he's made off with your kid sister (as depicted in the brill intro sequence) and you must run, jump and kill until she's back with the good guys.

Beast 2 has wonderful graphics (which aren't quite as good as the original), pretty good sound (ditto) and vastly annoying gameplay. Disk access time is simply too long, and it's simply too easy to die.

Believe me, Beast 2 is significantly worse than the original. If you were over the moon with the type of capers Shadow Of The Beast proffered, then Beast 2 might well warrant purchase - but at thirty five quid (albeit with "free" yucky t-shirt), you must be kidding.

Hmmm. Not really that bad, but un-user friendly gameplay isn't hidden by the brilliant visuals.

Hmmm. Not really that bad, but un-user friendly gameplay isn't hidden by the brilliant visuals.