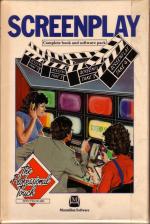 Screenplay sets out to provide not just the technique but also the means to make your own films. Of course, to realise such mega-ambition you need access to a video that'll automatically record the program you've compiled. But even without it you can still create a finished article which you've scripted, plotted, produced music and sound effects for and finally shot and edited.

As in other Macmillan packages the accompanying booklet is crucial. It gives a brief history of the moving image from the Victorian 'flickers' through cartoons to cinema and TV.

The software has five basic menus each with its own subs. Wordshot is the simplest - use it for dialogue but perhaps moat usefully for story boards. Sound track - is just that. The Speccy's musical abilities are limited but this'll let you compose simple tunes in C (bass or treble), in various time signatures. Don't expect too much and you won't be disappointed. Action - the nuts and bolts of your film. It allows you to build sprites on a 16 x 24 grid. A two grid sprite will give you simple animation. Screen- shot - lets you design the fixed backdrop and scenery. It uses the same grid as Wordshot. It's a simple art package with several facilities, including free hand drawing plus various paint/pencil/colour/shape options. Finally Take 1 lets you edit your final production, getting six frames to a shoot including up to 12 sprites.

Your productions with Screenplay won't be on the Steven Spielberg scale and a casual user may soon be frustrated and disappointed. But it's an informative package and if just one person discovers the magic of the movies through it, then it's worth it.

It's an informative package and if just one person discovers the magic of the movies through it, then it's worth it.