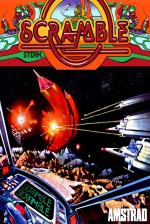 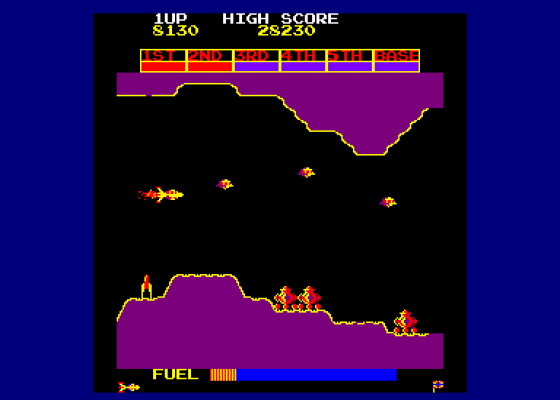 Arcade game conversions to home computers in the commercial gaming hey days of the 1980's and the 1990's didn't always eventuate. The arcade games that were converted to home computers had their fair share of hits and misses. The Amstrad CPC had some really poor conversions (no thanks to U.S. Gold), while others released by Ocean Software were quite brilliant for just 64/128K of code, graphics and sound. Gladly, I am able to inform you, that this arcade conversion of Konami's Scramble to the Amstrad CPC by developer PuzCPC, is a real beauty.

Japanese arcade game company, Konami, developed Scramble. However, it was manufactured and distributed by Leijac in Japan and Stern in North America in 1981.

It was the first side-scrolling shooter with forced scrolling and multiple distinct levels. It became an instant arcade success. There have been official and unofficial clones of Scramble made for home computers over the years, such as Atari 8-bit Airstrike (1982) and Bellum (1983), Skramble (yes with a 'k' in 1983) for the C64 and Whirlybird Run (1983) for the Tandy TRS-80. There have also been releases for the Vic 20, Tomy Tutor and Vectrex machines. Its legacy and popularity remain high; Scramble is listed in the Guinness World Records' Top 100 Arcade Games. 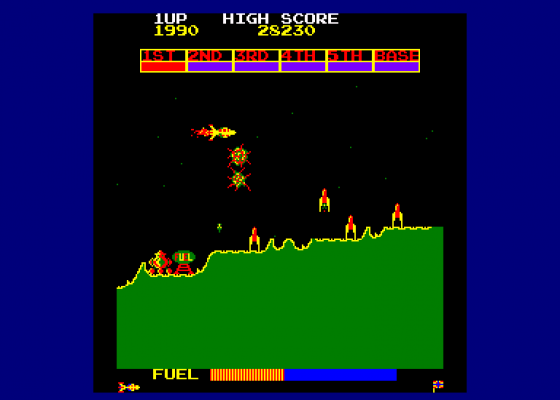 PuzCPC is a new Amstrad CPC game developer. His Scramble arcade conversion in assembly code (ASM) took about ten months to complete. What surprises everyone who has seen and played it, is that it is hard to believe this is PuzCPC's first game release on the CPC. Though what PuzCPC found surprising to him, is what the Amstrad CPC machine is capable of. To recreate the game on a 64K Amstrad, PuzCPC has made the game in the CPC's MODE 1. However, instead of the basic four colour combination, via the use of rasters this allows the standard four colours to be exceeded.

The screen size of the game is higher than normal: CRTC R1 = 32 (instead of 40); CRTC R6 = 32 (instead of 25); (R1 * R6 = 1024 against 1000 for a display called normal). While the game appears to be scrolling there is actually none. The right side tiles draw bottom of the ground and left side tiles clear tiles with the last four, and they need to be drawn from left to right every 8x. Overdrawing the terrain and enemy sprites occurs every second frame, left to right.

At the left side of the screen you take control of a lovely looking spaceship flying horizontally across a scrolling screen. Horizontally there is space and below you is the ground. As you fly along the screen your spacecraft loses fuel which is shown at the bottom of the screen.

To progress and complete the game you are required to shoot down enemy spacecraft flying towards you from below (ground) or horizontally (space). You shoot down the hordes of aerial enemies with fire button 1 and use fire button 2 to drop bombs, destroying enemy ground forces (you can use keyboard too).

When you hear a warning alarm sound, this indicates you are low on fuel. To replenish your supplies you must drop bombs on the fuel targets which are randomly spread out on the ground.

The game is divided into six sections, each with a different style of terrain and different obstacles. There is no intermission between each section; the game simply scrolls into the new terrain. Points are awarded based upon how long your spaceship survived, and how many enemies and fuel tanks it destroyed.

This game has all the arcade feel and qualities that make it a very authentic gaming experience. Are you playing an arcade cabinet or on mame? That's just how well this game has been converted to the Amstrad CPC. It's not overly difficult at the beginning so you have a chance to get to grips with the game style. Graphically it's gorgeous. The changing colours of the landscape, and the introduction of new enemies, are true to the arcade.

Sounds are wonderful too. It's just what you would want and expect when playing an arcade conversion such as this.

The low fuel warning seems to sound way too quickly and then bombing the fuel cans can be tricky when you are fixated on maneuvering and shooting at what is coming towards or below you. But this really is subjective as the same would be present in the arcade version.

It's fun. It's addictive. It's fast, responsive and very playable. It's an arcade conversion the CPC never had back in the day, but the wait has definitely been worth it!

It's fun. It's addictive. It's fast, responsive and very playable. It's an arcade conversion the CPC never had back in the day, but the wait has definitely been worth it! 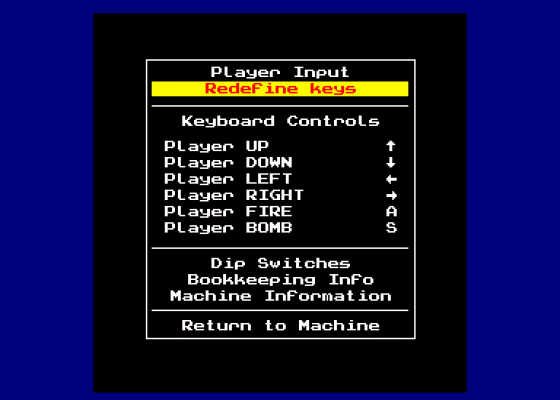