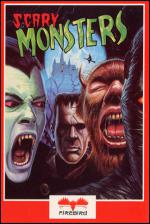 Harry Johns, ex-football star, adventurer and walking advert for dental floss has been stranded on an island withj only the diabolical Dr Graves and his mutant carnival for company.

The island is a prison for the mad doctor's latest creations but is also haunted by the dead ancestors of his victims, who people the houses and castles on the island. You start the story on an overhead view of the island. Move your pin-man representation of Harry Johns around until you come to a building which you enter by going in the front door. One of them will contain your lost love Conny, who's been kidnapped by Graves, but first you'll have to pass the hordes of witches, Frankenstein monsters and ghosts.

The building interiors consist of stairways, bannisters and landinngs. You can leave at any time you want but, if you want to finish the game, you'll plod on.

The one interior design in the game is shared by all the houses and castles, but there are three levels to it which you can reach by jumping onto stairs, bannisters and even some statues that depict Frankie, Frace and the Mummie. Monsters drift across all these levels but you can hit any of them with plasma energy that fires continually, and will point in any of the eight compass directions.

Alternatively you can press fire and pull the joystick down to neutralise all the supernatural forces on a screen. Harry faces front and his hands flash out as he casts a double, clammy, wammy spell. You've only got six of those, and three lives, so you'd better watch what you're doing.

If you get too close to a monster it'll bounce you around with some of that ectoplasmic force, at the same time draining your energy and, if you're caught by several other ghouls on the rebound, you'll be well and truly done. Just duck to avoid them, and don't jump around the levels too much. Unfortunately, it's that easy.

Once you've played out one house don't hang around to bump up your high score - easy enough if you keep your finger on fire. Leave by the left side of the screen and wander the map again. Your lady friend could be held in any one of the castles, houses and manors on the island and a good many of them are protected by mazes, bridges and one way entrances. Again, the mazes and other more natural protection devices are easy to get through or escape. The only aspect of the game which makes it a long player is the massive size of the map. It's a pity that there's no save game option available because you'll probably give up long before you've found Conny. Suddenly her rescue, and the thought of bravely battling all those witches, Frankies and Dracs, doesn't seem so appealing.

There is no menace as great as looming boredom!

You'll probably give up long before you've found Conny. There is no menace as great as looming boredom!