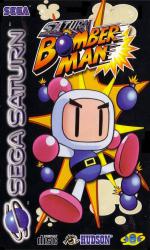 A few, fortunate games build their reputations on gameplay alone. Hudsonsoft's Bomberman series is a potion of that favoured few. Even in its earliest days, the graphics and presentation of Bomberman were spartan in comparison with other Gameboy/NES titles. And it's the same on the Saturn, though Bomberman has come of age in terms of complexity and ingenuity. Still, some people unacquainted with the gameplay may need guidance on why, on this occasion, 2D triumphs.

Hudsonsoft invented Bomberman on the NES. And they're still making them today.

Plant bombs around the maze in a bed to incinerate your enemies in the blast.

Bomberman's game concept is singular - plant bombs. Every bomb your midget bomber drops will explode seconds later, in horizontal and vertical blast zones, according to the open space around it. This effect is put to use to destroy walls and enemies, and in the multi-player game, other players. Of course, the blast does not discriminate, so you could fall victim to your own device!

Only a nutcase would prefer Bomberman's story mode to the legendary multi-player game. This takes place on a simple, themed maze, with human players attempting to bomb each other out of the game.

It's fast, furious and incredible fun. Bomberman Saturn takes it to ridiculous levels by allowing ten players at once. You need ten joypads, two multi-taps and a minibus.

The consolation for lone players is that this is the most imaginative Story Mode Bomberman has ever had. Dozens of levels, all linked, graphically themed and with lots of little features unique to a particular level. The objective is to destroy the pillars, and acquire enough powers to take on the end-of-level boss.

Single bombs are pretty unexciting but Bomberman offers the widest imaginable range of empowering features, hidden as little icons, released when a part of the wall is destroyed.

If you know Bomberman, the Saturn version has all-previous powers plus some. If you don't, peruse this selection:

All that's strong and all that's weak about Bomberman is contained herein. Short of attempting some kind of 3D debacle, you can't really expect Hudsonsoft to do much more with the concept.

The reason to buy Bomberman is the multiplayer mode. Two player is okay, get above that and it's excellent stuff that you'll come back to time and again because it's easy to set up and play for ten minutes or an hour.

The single player game is not nearly so compulsive, but the version here is as varied as possible. Even the infinite continues don't spoil a very challenging lone mode.

Bomberman is, was, and always will be a multiplayer game. No matter how much effort Hudsonsoft put into the one player 'guest' mode, it will always be seen as a distraction from the real deal. Tournament Model Four player Bomberman is an essential experience for anyone with an interest in games, and provided you have four pads, a multitap and four mates it's a brilliant way to spend an evening.

10 player Bomberman is even more hectic, though I doubt that most of you will have the resources. If you're going to make the most of the multiplayer option, then Saturn Bomberman is an essential purchase.

Graphics 80%
P. The epitome of all things miniature and cute. Lovely themed areas in the story mode.
N. Titchy, flat and not very next gen.

Animation 62%
N. Hardly noticeable on the game figures - they're too small. The game's main feature is speed.

Music 90%
P. The composer(s) have let their imagination go wild, with trip-hop-pop arrangements that drive the game forward.

Lastability 81%
P. If you have mates, you have months of fun ahead.
N. If you don't, you don't deserve to have fun, do ya?

Overall 85%
The best version of Bomberman there has even been. That can't be a bad thing.

The best version of Bomberman there has even been... The epitome of all things miniature and cute.