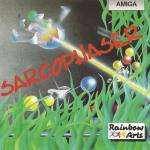 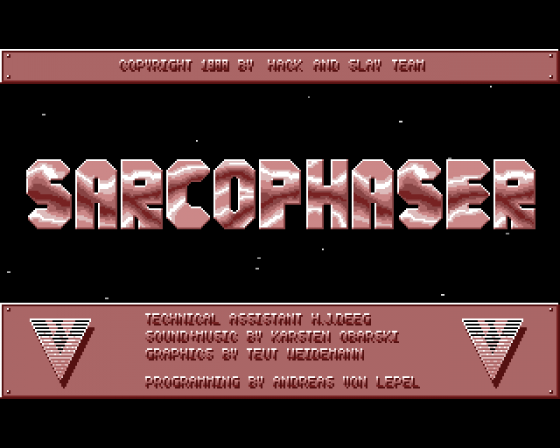 Everybody can tell what a cool dude you are - you've spent ages practising the Hofmeister walk, you've got the shades and the leather, the jeans and the cap - so what's missing? What's gonna get everyone really looking at you?

Let's see... hmmm, a pineapple print shirt, ghetto blaster, dinky electronic Fil-o-fax (no), Spectrum, soya beans, soap on a string, spaceship... Spaceship! Now that sounds more like it. So, what are you waiting for - jump into your nearest Rainbow Arts customised Sarcophaser (easy enough to find) and get blasting.

If you manage to wipe out a wave of aliens (nasty multicoloured flying thingies that belch bullets), avoiding upward thrusting enemy tendrils, failing to hit rocky outcrops by the skin of your teeth and blasting bonus bubbles out of the way, an energy pod appears. Collect enough of these pods and you can choose to array your lean, mean fighting machine with an awesome array of interstellar weaponry: turbo-power, extra fire, backward blasters, whiz weapons and bombs. Get enough firepower and you can even toggle between spray-bullets and great big enormous massive mega shoot. 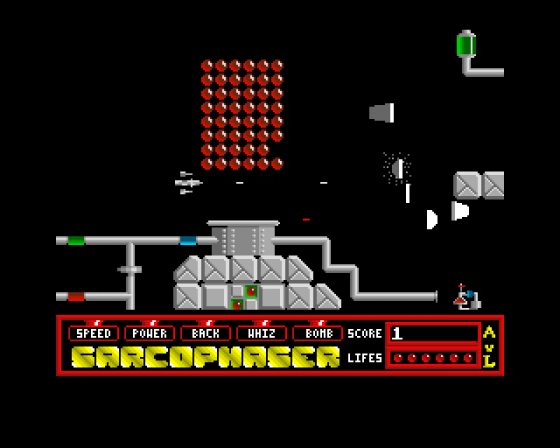 OK, so the first stage doesn't look particularly exciting, but the rest of Sarcophaser definitely makes up for it.

The graphics are classy, the whiz bomb, back shot and speed up weapons make for plenty of variety and the whole process is so tricky that it's bound to keep you pumping adrenalin.

When you've been blasted from the sky (Peking duck style) for the fifteenth time, it does get a bit annoying that you have to wait for the title music and the picture to load before every single go (yawn!) but in the end it's worth the wait.

I still think that £14.95 is just a bit too much to ask for what doesn't amount to much more than a top-quality budget-style game which doesn't even have in-game music.

As it stands, Sarcophaser is great - at £9.99 it would have been brilliant!

Have you noticed the great amount of shoot-'em-ups being reviewed in Zzap recently? I think it's great because I really like shoot-'em-ups and Sarcophaser is a good one.

The title music is pleasant, with some very nice minor chord changes to give a very eerie feel to the game. The in-game graphics and sound aren't that brilliant, though.

The sprites are a little small and feebly coloured and some of the sounds are... well, rubbish, to be quite honest: the alien gunshot sounds like a bad case of TB!

Despite these handicaps, Sarcophaser still manages to deliver the goods required of a shoot-'em-up - fast action and addictive gameplay (well I think they're the important bits and *I'm* doing this comment).

The game isn't that expensive at fifteen quid - in fact, that's rather cheap for a Rainbow Arts game - so I advise you to check it out before shelling out for that £25 Breakout variant.

With so many programmers going hell for leather to create revolutionary games for the Amiga, it makes a pleasant change to have a simple-minded blast-up for review.

The game's sprites and backdrops are only remarkable for their gaudy flatness, and most of the sound effects sound like they're sampled from a Western starring an asthmatic cowboy!

Luckily, addictive gameplay does a lot to make up for all this: plenty of aliens to shoot and plenty of weapons to shoot them with, make for fast and furious action which keeps you on your toes every step of the way.

The only periods of nerve relaxation are the face-offs with the end of level aliens - by the time you meet them you're usually so tooled-up that a few seconds of frenzied firing are all it takes to dispatch them!

At this price, though, such shortcomings are easily excusable and I'd say Sarcophaser is well worth further investigation.

Sound 50%
Pathetic in-game effects fail to live up to the funky title music.

Hookability 88%
One blast and you're hooked.

Overall 84%
A top-quality, low-price action-packed shoot-'em-up with excellent graphics. Miss it if you dare. 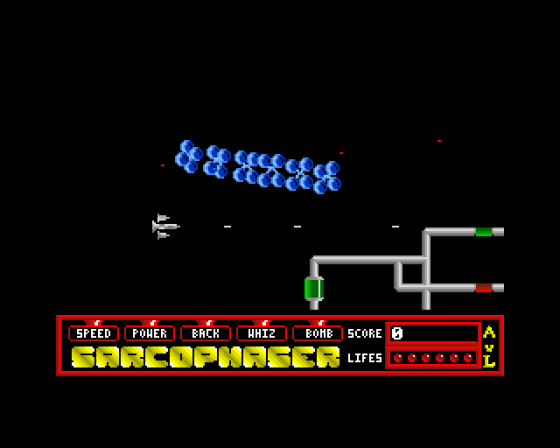