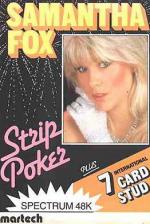 Martech's poker package offers two seven card stud poker games. On one side of the tape you can take on up to three opponents and on the other you can take off all your clothes in front of graphic screens featuring Samantha Fox.

Seven Card stud poker is the variation where the first two cards and the last card are dealt face down and if you've ever seen the film The Cincinnati Kid you'll know just how rivetting this game can be. It's sad to say that even with the gimmick of Sam Fox shedding her clothes (which, after all, is no great revelation) the game doesn't have the excitement of the real thing.

The disappointment is in the betting system. You start with equal stakes but your betting is vetted by a computer 'referee' who will only offer a limited range of options. This prevents you not only from betting wildly which is half the fun of a gambling simulation but also blocks some apparently sensible decisions. For instance, you might want to stack your cards but can't or you might want to call and are only given the chanc to check or raise.

As for the titanic tussle with Sam, it seems that you are not likely to lose your shirt as her play seems to have been programmed so she loses hers as rapidly as possible. If this was all there was to the package the novelty would wear thin very quickly so wisely there is a fully clothed version of the game on side two.

The four player game, where three hands are taken by the computer offers a little more of a challenge but not enough to make it addictive as two of the computer players usually drop out of the game very early leaving you with a single opponent. The instructions promise that each computer player has its own "ability and playing style" and can adapt their 'thinking' to counter your play. After playing for a while I was still unable to decide whether the instructions were bluffing.

In its favour, the game is fast enough to avoid lengthy waits between bets but the biggest drawback is the lack of a free hand when it comes to the betting.

The biggest drawback is the lack of a free hand when it comes to the betting. Sam Fox shedding her clothes, after all, is no great revelation.