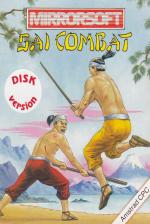 It looks good and it sounds good - that's Mirrorsoft's Sai Warrior on the Amstrad. Basically, it's a sort of Way Of The Exploding Fist with sticks. And good fun it is.

Sai Karate is a martial art in which the fighters use a Sai Weapon - a big pole, in other words. Add to this a variety of karate kicks and you've got the ingredients of a violent punch up.

The idea, as with most of the seemingly millions of martial arts games on the market, is to fight your way through eight levels, from white to black belt and then through the eight dan levels until you reach Sai Master. At various stages in the game there are extra hazards to face - such as Ninja stars hurtling by.

Points are scored for successfully landed blows. A total of 600 points are needed for a knockdown. Energy levels are shown on the dragon's heads on the scoreboard. Three knockdowns are required to progress to the next level.

The Sai Warriors are big, bright and very colourful. The sound is quite funny. The supposed whoosh of the Sai weapon through the air sounds a little like a jet engine starting up.

A sort of Way Of The Exploding Fist with sticks... Good fun it is, and the Sai Warriors are big, bright and very colourful.